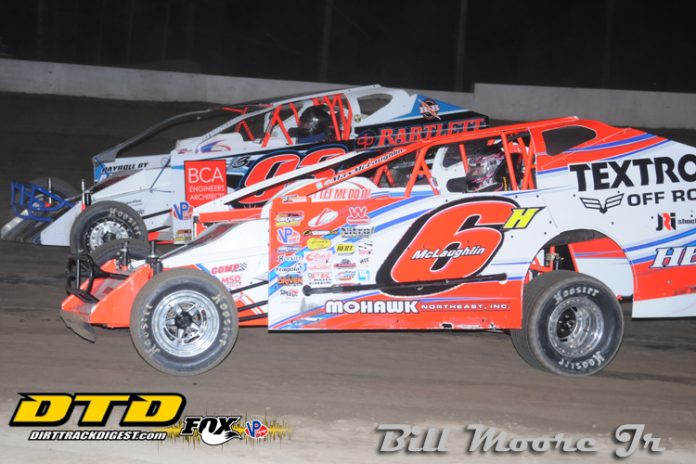 BREWERTON, NY – Max McLaughlin and Billy Decker shared the checkered flags at Brewerton on Friday night, with Decker scoring the win in the regularly scheduled feature, and McLaughlin taking his first Brewerton win in the holdover feature from two weeks ago.

Jeremy Smith took command in the postponed feature from earlier this month, which was halted four laps into the event. Smith held a small but consistent lead over Tim Sears Jr. and McLaughlin early in the event before the first yellow flag flew on lap 10 for Jeff Blackburn’s spin. Jimmy Phelps had climbed up to fourth from ninth in the first handful of laps, trailed by Billy Decker in fifth.

On the restart, half of the field wrecked. Tim Kerr and Chris Hile got hooked together exiting turn four, looping both cars in front of the pack. The aforementioned top five plus Rob Bellinger, Matt Hulsizer, Andrew Ferguson, and a few others were all that were able to miss the carnage. A number of drivers such as Larry Wight, Pat Ward, and Roy Bresnahan returned to competition, but most were done for the evening. The field restarted once more, this time without harm, and the front of the field remained status quo until Wight spun to a stop on the backstretch with mechanical issues on lap 19.

Just a few laps after the restart, Tim Sears Jr. got his first taste of the lead, rolling past Jeremy Smith. Smith then fell back into the clutches of McLaughlin and Decker, as the trio raced three abreast behind Sears for second. Just a lap later, the three wide battle then shifted to the lead, with Sears on the outside, Smith rebounding in the middle, and McLaughlin down low. McLaughlin nosed out in front, with Sears hanging tough on the outside and Smith slipping back. One final caution for Rob Bellinger’s mechanical issues with 22 laps completed set up a dash to the finish, with Sears lining up alongside McLaughlin.


Over the final 13 laps, Max McLaughlin remained unfazed, running the bottom of the track like a driver with much more than a year and a half of Big Block Modified experience under his belt. While Sears hung tough on the cushion for the first laps after the restart, McLaughlin slowly pulled away for his first Brewerton win and second anywhere of his career. Sears crossed in second, followed by Phelps, Decker, and Smith.

“We had a really good car all night, we tried some new stuff this week after struggling here all year, but man, this thing is a hot rod,” McLaughlin noted after the race. “I’m really excited for the end of the year, if we keep it going like this, it’ll be good, we haven’t had this much drive off all year. I knew if I could stay on the bottom and run that groove I’d be in pretty good shape. I haven’t been able to hit my marks like that in a while, this thing basically drove itself.”

In the second feature, it was Larry Wight launching from third to first on the opening lap to grab the lead. Wight instantly kicked on cruise control, opening up a comfortable advantage in the first 10 laps before Ryan Bartlett’s spinning ride drew a yellow flag. While Wight continued to show the way after the restart, his lead was not what it was before the caution, as teammate Ward was glued to his rear bumper. Behind Ward was Billy Decker and McLaughlin, all of who ran the bottom of the track.

At halfway, Decker slipped under Ward for second, with McLaughlin following through for third. The top three ran nose to tail, with Decker briefly testing the grip on the high side before sliding back into position. A lap 25 caution for Hulsizer stopped on the backstretch forced one final restart, with Wight choosing the bottom, where he had run all race. Decker quickly tucked back in line behind Wight, with McLaughlin continuing to trail in third.

As the laps clicked away, it became apparent no driver was going to easily drive under Wight, so Decker ventured once more to the top, where this time he found speed. With five laps left, Decker had reached Wight’s door, inching further forward with each lap. The pair continued to race side by side, with Decker finally being scored the leader with two laps remaining. Decker and Wight battled hard over the final laps, with Decker hanging onto his slim advantage to score his fourth win of the season in exciting fashion. Wight hung on for second, with McLaughlin a close third, just .4 of a second behind Decker. Behind the top three’s battle, Pat Ward and Tim Sears Jr. completed the top five.

“Mike Payne Racing made some great changes in between the features, it made this car really good. I really enjoyed racing with Larry, he was running good. He just, well we got a phrase for that, but I can’t say that right now. He had no choice, he was stuck there on the bottom, and I was just praying for it to slow down on the bottom, and it did, it made the top and the middle viable. He couldn’t move leading the race, so I wound up here.”

Michael Stanton appeared to be well on his way to a Sportsman win, but relinquished his once huge lead to Zach Sobotka following a mid-race restart. Sobotka now looked to be headed to victory lane, but Stephen Denton spoiled his party, snatching the lead away from Sobotka with five laps remaining and scoring his second win of the year. Mod-Lite action was dominated by Casey Sykes, returning to victory lane in the caution free affair for his fifth win of the season. Chris Bonoffski cruised to yet another 4-Cylinder win, but possibly his last, as he noted next week will be his last in the car. Bonoffski plans to debut his newSportsman at Fulton the next night.