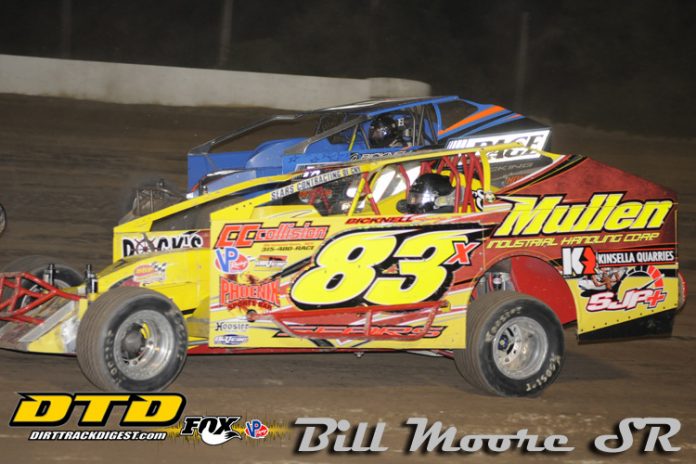 BREWERTON, NY – Back in his old car and back in victory lane, Tim Sears Jr. is on a roll late in the season. Fresh off a dominating win his last time out at Fulton, Sears drove from 14th to the win at Brewerton on Friday night.

Tom Sears Jr., uncle of Tim, started on pole of the 35-lap feature event and paced the field early over Mike Bowman. While the top two cruised comfortably out front, action behind the leaders was intense on the fast, wide, and racy surface. By the time the first yellow flew on lap nine for Roy Bresnahan’s mechanical issues, the younger Sears had drove his yellow and red #83x up into the top five. Tim didn’t stop there, as he reached third by lap 14.

As the race passed the halfway mark, Tom Sears Jr. held on to a steady advantage over the battle for second, consisting of Bowman, Tim Sears Jr., and Mike Mahaney. Further back, Billy Decker had begun to show his cards, pressuring Lee Gill for fifth by lap 20. Four laps later, the caution waived once more, as Chad Phelps made contact with an infield tire, collecting Jimmy Phelps. When the field lined up for the restart, it was Tim and Tom on the front row.

While both Sears had their preferred groove, Tim down low and Tom up top, Tim’s lane was a little bit faster. Tim nosed out in front of Tom for the lead when the race resumed, now trailed by Billy Decker in third. The uncle and nephew pair briefly fought door-to-door, but one final yellow with 29 laps completed for Tim Kerr’s flat tire slowed the pace again. The battle between the top two picked up right where it left off, but Tim cleared for the lead after a couple of circuits. With two laps remaining, Billy Decker slid past Tom Sears Jr. and began to chase down Tim, but could only get to a car length away as the pair raced under the checkered, with Tim Sears Jr. Victorious.


“Its been a while, but we’ve been really fast over the past couple of weeks. I got to thank the whole LJL and Gypsum crew, this is a brand new LJL motor under this thing, and it runs pretty good,” said Sears. “I was watching Tom on that previous restart, and I saw he wasn’t holding the bottom. I knew that if I could get under him and get by, I could hold my own and it would come to me.”

Jackson Gill and Earl Rudy raced for the lead in much of the Sportsman feature, but a slide job with five laps remaining was the move Ronnie Davis III needed to score another victory at the track. Casey Sykes won a race-long battle with Brian Meyers in the caution-free Mod Lite feature, his sixth win of the season. Another driver scoring his sixth of the year was Chris Bonoffski, claiming victory after a spirited fight with Chuck Powelczyk and Jacobe Palmiter. Unlike Sykes, Bonoffski won’t have a chance to go for seven next week, as this was the final 4-Cylinder event of the year at the track, with Bonoffski also named track champion.