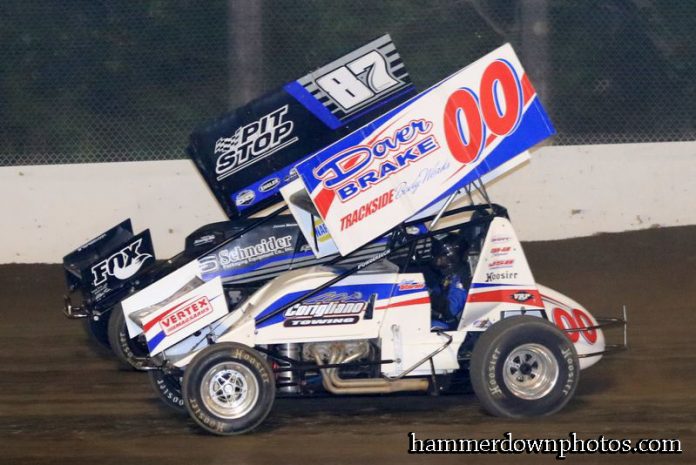 BREWERTON, NY – Friday night’s Lucas Oil Empire Super Sprint A-Main at the Brewerton Speedway was a thriller with Danny Varin out maneuvering local favorite Jason Barney in the final laps to take his fourth series victory of the 2017 season. Varin also picked up the 7-12 challenge bonus by winning from the seventh spot allowing him to take home $3,825 for the triumph.

“It’s amazing,” said Varin after the win. “We are on top of the world right now. We came here and wanted to finish the race to get to tomorrow. We made into tomorrow and got a little extra pocket change to spend with on it.”

Varin, of Fonda, N.Y., ran in the top five for much of the race before making a charge late. He sat third with three laps to go when the caution came out for a spinning Larry Wight. On the restart Varin and Barney battled swapping the lead multiple times around the d-shaped facility with Varin coming out on top on the final lap.

“I really think Barney had a better car there,” stated Varin. “It was unfortunate what happened to Larry (Wight), but it gave us an opportunity to get a good run at Jason (Barney). He’s the cleanest driver out there. Every question I have he answers. He’s just a phenomenal competitor. I just drove it in there wide-open and either we were going to wreck it or put it in victory lane.”


Matt Billings, fresh off his first career series win last weekend in Quebec on the asphalt, redrew the pole for the start of the 25-lap feature. Billings raced quickly away from the field while Wight jumped from sixth into the top three on the first lap.

Billings remained at the helm as Wight kept moving up through to take second by the time race reached lap five. From there it was a two car battle at the front for the lead with Wight eventually wrestling it away from Billings on the bottom of turns three and four on lap seven.

The red flag was necessary on lap nine for a four car incident in turn one. Brett Wright, Dalton Herrick, Jeff Cook and Paulie Colagiovanni all came together with Colagiovanni sustaining significant damage to his No. 10 after going over. Everyone walked away uninjured in the incident.

A caution on lap 22 set up a showdown between Wight and Barney. Barney worked the outside as Wight went to the bottom before sliding up in front to hold off Barney. As they raced down the backstretch the pair pinched down to the bottom with each looking to gain the edge. Wight ended up spinning in the fourth corner as his right rear tire just got into the slick. Paul Kinney, who was fifth, ended up getting into the outside wall as well.

With Wight relegated to the rear for being the initial reason for the yellow, Barney paced the field for restart with Varin right there. The green saw Barney go high into the first corner with Varin down low attempting to slide Barney. Barney beat him off the corner and held the top spot as the came to the line with two laps to go.

They swapped lanes and the lead with Barney coming to the line in the top spot as the white came out with Varin right there. Barney elected to run the bottom to protect against the slide job through turns one and two which gave Varin the open lane on the top.

Varin and Barney raced side-by-side down the backstretch with Barney forced into the low lane and Varin on the cushion. As they came off the fourth corner it was Varin using the high-side moment to drive around Barney for the victory.

“I didn’t expect it,” cited Varin about Barney electing the bottom on the final lap. “Jason knows what he’s doing. I think we have a very similar driving style. He had to cover the bottom. He did the right thing, but I was going to go wherever he didn’t. He was protecting against the slide job. Whatever was going to happen, was going to happen.”

Barney, the current high-point man, was disappointed with himself afterwards that he made a mistake in the final laps to give up the lead after an impressive charge from the 21st starting position. He was hoping to get it done in front all the friends and family that had come out to support him at his home track.

“I’m really bummed out here,” commented Barney. “I’m disappointed for my guys, disappointed for everyone who came to watch me tonight. I got a lot of family and friends here. It felt sweet there for a little bit. I just got a little excited there and started defensive driving instead of offensive driving. I was trying to predict where they were going to go and it cost me the race. I feel bad. It would have been a storybook winning from 21st. Danny ran a hell of a race. He’s a great race car driver.”

Billings came home in the third position after setting the pace in the early stages of the race. The third matched his best finish on the dirt this season with the series.

“This is an awesome car that Mike (Stelter) put together,” said Billings. “We are standing on the front stretch, not too bad. We led some laps. We are getting the car better.”

Billy VanInwegen started 18th before coming home fourth while Granby, Conn., driver Scott Holcomb was able to complete the top five for his best run of the year to date. A total of 33 cars filled the pits on the kick off of a four race weekend.