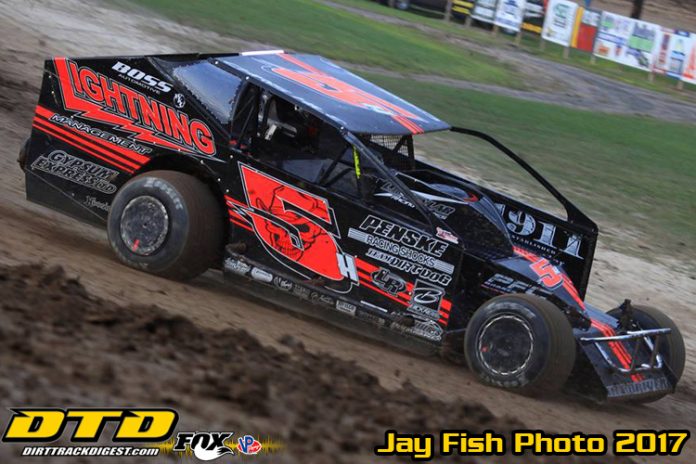 BREWERTON, NY – Chris Hile finally parked his black #5H in victory lane on Friday night, coming out on top of a wild 4-car battle by just inches at Brewerton.

Hile took command at the drop of the green flag for the 35-lap event, setting the pace over Adam Roberts, and then Mike Mahaney. A lap 10 yellow for Jeff Blackburn’s flat tire slowed the action momentarily, but not for long, as Hile and Mahaney began battling as soon as the field restarted. While Mahaney nosed ahead to lead lap 12, Hile regained it once more. Another yellow on lap 17 for Roy Bresnahan bunched up the pack again.

By lap 23, Billy Decker had climbed to third from 18th, trailed by Jimmy Phelps. With every passing lap, the top four got a little closer, but with the aid of a final caution for Dan Vauter set up a crazy nine-lap war to the end. On lap 31, Billy Decker split the middle of Mahaney and Hile, going from third to first in a single turn.

As Decker seemed ready to cap off his track championship in style, Hile had other plans, as he regained the lead with a massive slide job entering turn one with less than two laps to go. The move propelled Hile back to the lead, but sent Decker back to fourth in the tightly bunched group. With Hile up top, Mahaney went to work on the bottom, hanging even with Hile on the last lap. At the line, it was Chris Hile taking the checkered by mere inches over Mahaney, Jimmy Phelps, and 2017 track champion Billy Decker.

“That was a heck of a race we got going there. I’m not sure how crossed up I got Billy, but you got to go and got to make those moves,” Hile stated. “It just goes to show how hard it is to win a race here, and hats off to those Mike Payne Racing guys on their title, it’s really a special thing.”

The fourth place finish secured the track title for Decker, and gave him the full 1000 point bonus for the Super DIRTcar Series, a number that may be very crucial come Charlotte. “That was a really crazy race, I just have to thank everyone that works so hard on this car every week and gives us this equipment,” Decker said. “I had to get on the binders to not wreck both Chris and I, and ended up stalling the motor some. By the time I got going, I was back in fourth and it was too late.” Decker had high praise for both his team and the track after his championship season, his first with MPR. “It’s great racing here at Brewerton, and an indication of two things,” said the champion. “We had a good race car each and every week, and showed up with a car capable of winning from the back. Secondly, we’re racing on a track where if you’re going, you can get to the front, and if not, you’ll find your level.”

The Lucas Oil Empire Super Sprints made their first of four stops this weekend at Brewerton, with Matt Billings leading early. Billings surrendered the lead to Larry Wight on lap six of the 25-lap event, but all eyes were focused on a car behind them. After another couple cautions, Jason Barney had worked past Billings for second, reaching the spot by lap nine after starting 21st.

Over the second half of the race, Wight and Barney waged war at the front of the pack, swapping lanes and throwing bonsai sliders. Unfortunately, the battle came to a halt with three laps left, as Wight and Barney made slight contact, sending Wight into a slow spin. With one contender relegated to the tail of the field, Barney’s job didn’t get any easier, as Danny Varin charged late, forcing Barney to play defense. However, Barney couldn’t defend quite well enough, as Danny Varin slipped past on the last lap for the win.

Zach Babcock claimed the close win in the Mod-Lite main, fending off Brian Meyers late in the going. Justin Williams, son of the winningest driver in the division at Brewerton in Doug Williams, claimed his first championship. Nick Krause slipped past Chris Cunningham for the lead at the midpoint of the Sportsman main, and held off champion Ronnie Davis III for the checkered.