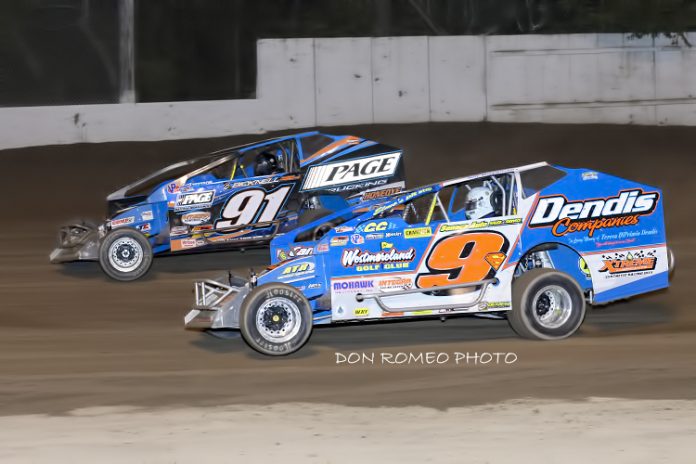 BREWERTON, NY – It was a wild night at the Brewerton Speedway as Matt Sheppard continued his solid form taking home his ninth Super DIRTcar Series triumph of the 2017 racing season. The Waterloo, N.Y., driver did it the hard way by first passing Brewerton Speedway track champion and Super DIRTcar Series high-point man Billy Decker before working over Larry Wight in the final ten laps to pass him as well for his 56th career series win in the Duel at the Demon 100.

The race got off to a rocky start for Sheppard as he faded at the drop of the green falling all the way out of the top ten after starting seventh. As the track started to slow down and become slick, Sheppard made his charge. Sheppard worked both high and low lanes on his march back to the front, but it was the bottom lane that prevailed which allowed him to drive by both Decker and Wight for the win.

Pat Ward drew the pole for the start with Wight lining up next to him on the outside. The teammates entertained the crowd for the first 20 laps as they swapped the lead back and forth multiple times. First it was Ward using the top of the speedway to take the lead before Wight drove back by on the inside. They continued that side-by-side battle until lap 21 when Wight was final able to open up the gap on Ward and the rest of the field.


Wight lead was chopped down on lap 22 as Justin Haers and Mike Bowman got hooked together in the third turn causing both drivers to spin to force a yellow. The green came once more on lap 28 with Wight just beating Ward off of turn two to maintain the advantage while Tim Sears Jr., and Jimmy Phelps had a battle of their own going. The pair raced hard as they each wanted that final spot on the podium early.

Phelps was able to take it from Sears on the 33rd lap as Wight and Ward continued to stay at the front of the field. Six circuits later Wight began the challenge of slower traffic as he looked to increase his lead over Ward. At times the traffic was a struggle but early on Wight was up to the task working his way through without issue.

Wight led lap 50 over Ward and new contender Decker. Sheppard sat back in the sixth position trying to find a way to make ground on Phelps and Sears, as they swapped the fourth position. He eventually got by Sears on lap 60 to move into the top five for the first time.

“The track was super tacky tonight,” said Sheppard. “We needed the track to slow down. The more the track slowed down the better we got.”

As the race reached the final third Decker got things rolling as he took second away from Ward before setting his full attention on the LJL Racing No. 99L of Wight. Wight was in traffic as Decker began to close the gap. Decker made the difference evaporate before a caution on lap 77 for a slowing Lee Gill cleared the track for Wight.

When Wight put the foot on the throttle to bring the field back up speed as he was chased by Decker and Sheppard who had moved up to third just before the caution. Sheppard worked Decker with the two rubbing nerf bars on a couple different occasions. Decker left the bottom open on lap 80 giving Sheppard the lane he needed to drive by for second.

With Decker now disposed of, Sheppard focused on tracking down Wight. Sheppard quickly got the rear bumper of Wight’s car. He then stalked him waiting for the opportunity to make the move. He saw his opening on lap 89 as he stayed on the bottom to pass Wight coming to the line off of turn four.

That wasn’t the end as Wight regrouped on the outside. Wight came back at him to regain the lead on lap 90 at the line. They stayed side-by-side into the first turn with a slower car thrown into the mix as well. As they worked through corners the slower car drifted up off the bottom giving Sheppard the open lane while Wight was forced to go higher than expected. That was all it took for Sheppard to secure the lead before checking out.

“We just had such a good car there on the bottom,” said Sheppard. “It seemed like Billy and Larry couldn’t keep it down on the bottom. Billy got a little upset, but I guess if he doesn’t want me driving under him he shouldn’t get off the bottom.”

Sheppard drove away in remaining laps to grab another win while also improving his spot in the points. Decker continues to lead the points but Sheppard has moved into second while closing the gap to 57 points.

Wight came across the line in the runner-up position. Afterwards the Phoenix, N.Y., new his car was good in the early going but once the grip started to fade his car was off a bit. He felt like that’s what allowed Sheppard to close in an eventually make the pass that forced him to be happy with second.

“We had a good car, but it was just a case of too good too early,” commented Wight. “We had that caution when Lee (Gill) got a flat tire. I’m not sure if we sealed a tire or what happened, but we couldn’t quite hit the bottom as good running through the black. We were there at the end so it’s a good point’s night for us. Hopefully we can keep on going.”

Phelps got Decker in the final laps to finish third. It was an up and down night for the Baldwinsville, N.Y., driver as he got up to third at one point, fell back a bit before racing his way back up through at the end.

“We anticipated that slick condition we got right there at the end a little bit earlier,” said Phelps. “We were just a little bit too tight. We fought tight the first 60 percent of the race and got pretty decent at the end. At that point we had to place catch up. There were some fast cars already ahead of us at that point.”

Sears grabbed the fourth spot at the end while Decker fell back to finish fifth in the final results.

The Super DIRTcar Series is back in action on Saturday, September 16 at the Mohawk International Raceway before a stop on Sunday night, September 17 at the Cornwall Motor Speedway. For more information about these upcoming events visit http://www.mohawkspeedway.com/ or http://www.cornwallspeedway.com/ or logon to the official website of the Super DIRTcar series at www.superdirtcarseries.com.