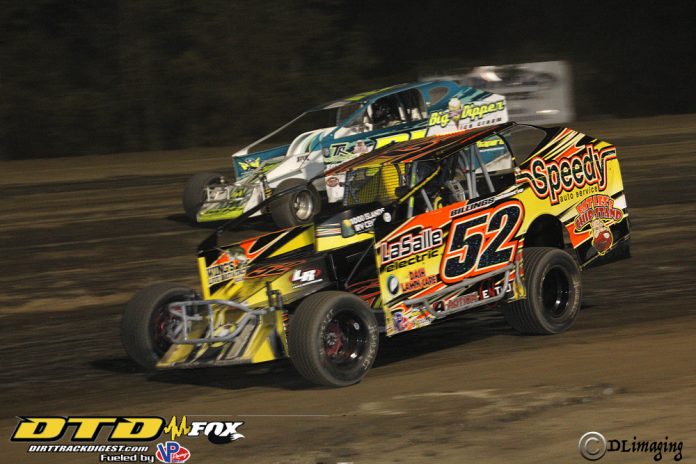 BALDWINSVILLE, NY – Major marketing partner, Industrial Tire of CNY, will once again be the title sponsor of the lucrative, driver and fan favorite Sportsman Shootout Championship 50 during the 33rd Annual Outlaw 200 Weekend presented by SUNY Canton on September 28-29.

Known as one of the crown jewels and prestigious races to win for the Sportsman in the Northeast, one had to look no further than 2017 when 111 competitors attempted to qualify for the event. It would take 10 heat races, 5-consolations and 4- last chance races to set the 30-car starting field for the Industrial Tire of CNY Sportsman Shootout 50. In the 50-lap battle 2017 track champion, Ronnie Davis III, would hold off Sportsman stars Dave Marcuccilli, Rocky Warner, Todd Root and Brad Rouse for the $2,500 payday.

About Industrial Tire of CNY:

Located at 1015 Hiawatha Blvd. E. in Syracuse, NY, Industrial Tire of CNY is a family-owned and operated company founded by Dennis Beaudette over a decade ago and will continue to be in the family name for another generation with Dennis’ two sons, DJ and Marty following their father’s footsteps. Industrial Tire of CNY, believe one of their superior assets is their dedicated and highly skilled workforce enabling them to respond quickly and efficiently to service their clients’ requirements. Their reputation relies on their swift response and local relationship to Upstate New York. “Exceed customer expectations” has been the guiding principle of their company and has proven successful and will continue to be their objective in the future.


New and Used Tires
Industrial Tire of CNY’s superior tire inventory gives their customers the opportunity to compare prices to find the right tire to fit their budget.

Goodyear© Retread Plant Now Opened
With this addition, they can eliminate your company’s costly equipment downtime by offering a quick turn-around time on retreads. Our team is highly experienced, with over 70 years in the retreading industry.

To see all the services they have to offer and hours of operation please visit www.industrialtirecny.com.

Following a fun and successful ‘Winter Blast’ on February 17, the 32nd Annual Syracuse Motorsports Expo on Saturday & Sunday, March 10-11 at the Center of Progress building at the New York State Fairgrounds will be the next public event for Brewerton and Fulton Speedway. Stop by the booth to pick up track schedules, purchase season tickets or pit passes and ask any questions you might have for the rapidly approaching 2018 race season. Five cars will be on display including the DIRTcar 358-Modified of Ron Davis III, Brandon Ford’s DIRTcar Sportsman, the RUSH Late Model of Chris Fleming, Mike Mullen’s Mod Lite and Nate Power’s JB Logging and Firewood 4-Cylinder.

Action at Fulton Speedway kicks Saturday, April 21 with Test and Tune followed a week later by the first big race weekend of 2018, the ‘Highbank Holdup’ weekend Friday and Saturday, April 27-28.