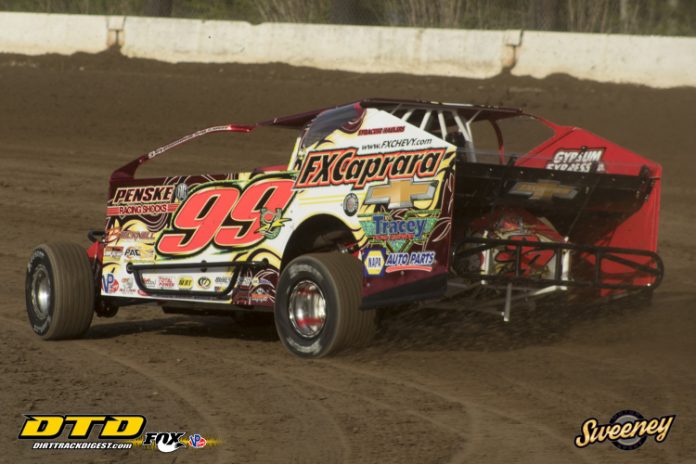 BREWERTON, NY – Larry Wight’s red hot start to 2018 isn’t showing any signs of cooling off, as the opening night winner made it two-for-two at Brewerton.

After a rough opening night, Pat Ward started on the pole for the 35-lap Modified feature and quickly established dominance. While Ward ran steady out front, the top two from last week were slicing and dicing through the pack, with Larry Wight cracking the top five just five laps in with Jimmy Phelps hot on his heels. After a pair of early cautions, Wight reached second just nine laps into the race, with Phelps slotting into third on lap 13.

As seen many times in central New York over the years, it was two red cars battling for the lead. Wight inched closer and closer to Ward, with Wight up top all the way around the track, and Ward running the bottom in turns one and two and the top in three and four.

On lap 16, Wight used a monster run off of turn two to draw even with his Gypsum teammate and take the lead as the duo raced into turn three. Wight pulled away, while Ward fell back into the clutches of Phelps. However, Wight’s advantage was erased when Tim Kerr stopped on the backstretch to bring out the caution on lap 21.


Wight chose the bottom for the restarPt, a move he instantly regretted. Ward hung on Wight’s door down the frontstretch and was able to take away Wight’s line on the cushion in turn one, rocketing back to the top spot. Wight slid in behind Ward, but Ward didn’t get away at all.

Another caution for Max McLaughlin breaking on lap 25 gave Wight another shot at the lead, and this time he wouldn’t be regretting any moves. A crossover down the backstretch allowed Wight to slide up in front of Ward entering turn three, regaining the lead with 10 to go.

“I didn’t think there was enough traction up top for Pat (Ward) to get me, but he took the top away and stole the lead,” Wight said of his battle with Ward. “We just tucked in behind him and I think we would’ve been able to set him up later in the race and get around him, but we got that last caution. I learned from my mistake and we were able to get around him.”

Phelps pulled an identical move the next time around the gain the second spot, shoving Ward back to third. Meanwhile, Ronnie Davis III was making his presence known, charging from 15th into the top five with his 358 powerplant.

With nine laps left, it was deja vu from last week, with Phelps chasing Wight for the win. Just like the week prior, Wight was planted firmly on the cushion, with Phelps trying every line on the speedway trying to find some extra speed. However, Phelps couldn’t find the time he was looking for, and Wight charged to his second win in a row to kick off his Brewerton season. Ward chased in third, followed by Davis III in his small-block and Tim Sears Jr.

Two Sportsman races, two wild battles for the win. In the first feature, Tony Finch held off a charging Alan Fink for his first win in some time after not racing in 2017. Chris Mackey came out on top of a crazy, side by side, race-long fight with Kevin Root to claim the win by 1/10th of a second. In all, 45 Sportsman signed in for action.

The crate Late Models made their first appearance of the season, and Kevan Cook dominated the 20-lap feature. Cook ran hard on the cushion, keeping Sean Beardsley at bay right through the finish.

It’s only week two, but Justin Williams will clearly be the man to beat in the Mod Lite division, romping to his second dominating win in a row.

Chuck Powelcyzk returned to victory lane in the 4-cylinders, his first of the year after passing Ray Bechler.