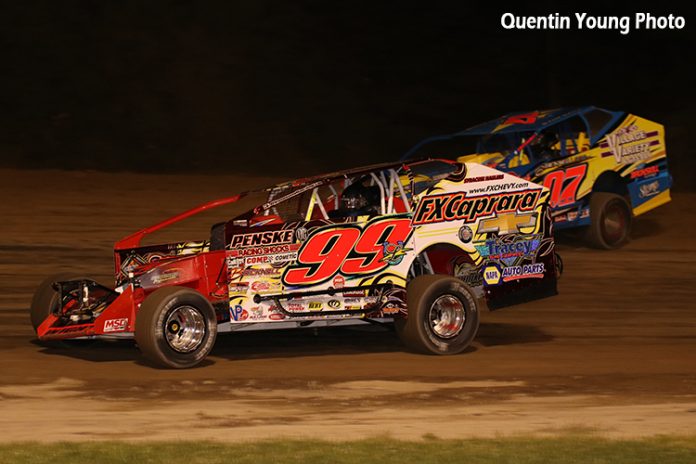 BREWERTON, NY – Some things just never change, and one of those things seems to be the finishing order at Brewerton Speedway. Larry Wight went 3-for-3, with Jimmy Phelps hot on his heels once more.

“We had to claw and fight for this one,” Wight said. “The track conditions were awesome, and it allowed the other cars to be just as fast early. It took a little longer to get up through there, but once we got to some clear track we were able to run guys down and make up time.”

Ontario’s Tim Kerr snatched the lead at the start of the 35-lap Modified feature, hoping to become the first person not named Larry Wight to grab a Brewerton win in 2018. Things didn’t stay to Kerr’s plan for long, as Tom Sears Jr. blasted to the lead off an early lap two restart.

The top two finishers were the same for both races this year, with Wight winning over Phelps on each occasion. It didn’t take any time for those two to find their way to the front, as when Rob Bellinger slowed for a yellow with six laps in, Phelps was up to fourth and Wight seventh.

The Baldwinsville Bandit was on a mission, charging up to second on the restart. After a few laps of side-by-side action with teammate Max McLaughlin, Phelps cleared and dropped back to his preferred bottom groove, then setting his sights after Sears.

Behind him battled the duo of Gary Tomkins and Wight, who had a minor altercation in their heat race. At halfway, the top four of Sears, Phelps, Tomkins, and Wight were nearly on top of one another.

Phelps took his first shot at the lead on lap 21, drawing even with Sears off of turn two. However, Phelps was not alone on the bottom, as he had to check up for a slower car and allowed Sears to hold on.

Sears could only hold on for moments longer, as Phelps got a great drive off the bottom of turn four to be scored the leader with 26 circuits completed. Just as it seemed Phelps would walk away with the checkered, Chad Phelps slowed to draw another yellow flag.

Wight finally got past Tomkins for third on the restart, and then went after Sears for second. With a slide job on lap 29, Wight claimed the runner-up spot and was under half a second behind Phelps.

Using the cushion to his advantage just as he had the first two weeks, Wight put the hammer down and drove to the lead with four laps left. Four laps later, and it was Wight keeping the undefeated streak alive at Brewerton this season.

When asked what seems to be the difference this year in his speed, Wight simply replied, “that baby food is expensive.”

As per usual, a large number of Sportsman meant the field was divided into two features. In the first race, Nick Krause drove to the lead and then had to hold off a charging Zack Sobotka and Matt Janczuk through a number of restarts to score his first win of the year. In the second feature, Will Shields rolled the bottom to perfection, passing Brent Joy at halfway and never being challenged the rest of the way. Shields also picked up some extra money later in the night, as the top four in both features went to a 6-lap dash where Shields came out on top.

Ray Bechler and Chuck Powelczyk have fought, raced, and even wrecked for wins time and time again in the 4-Cylinders, but no race was closer than this one. Powelczyk was leading entering turn three on the last lap, but pushed up. Bechler dove to the bottom and got a great run, beating Powelczyk to the win by mere inches.

The Mod Lite feature was deja vu from the race prior, which was also just like opening night. Justin Williams remained perfect on the year, walking away to another dominating win in the division.