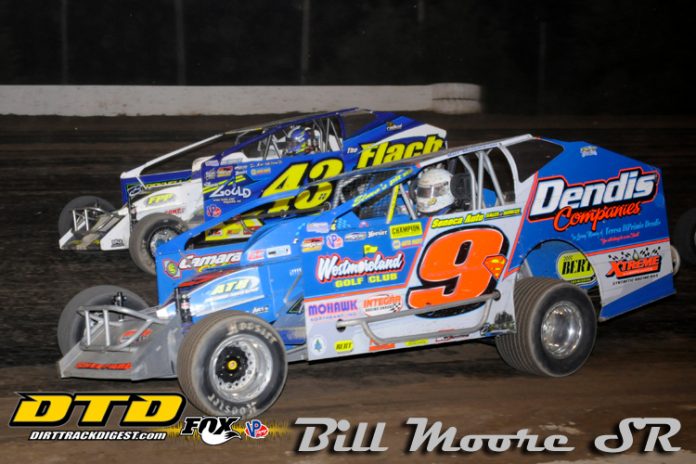 CONCORD, NC  – Defending Super DIRTcar Series Champion Super Matt Sheppard has officially picked up where he left off last season. Sheppard put Big-Block Modified drivers everywhere on notice, after a dominating green-to-checkered flag, 100-lap victory. A full third of the field watched the no. 9s streak by as he lapped up to position 10. Sheppard was quick in Time Trials and narrowly scored a Heat Race win over veteran Brett Hearn. The no. 9s pilot then picked the pole position in the Dig Safely 811 Redraw. Only two cautions slowed the action and Sheppard was able to fend off two Deckers and a Phelps in his wire to wire win.

Matt Sheppard now has 60 Super DIRTcar Series point-paying wins to his credit and this was his fourth Series win at Brewerton Speedway. Shane Andrews discussed the win with Sheppard in Victory Lane: “It’s nice to come back to Brewerton and park it in Victory Lane. The car was really good at the bottom for most of the race but towards the end of the race I could feel the track start to change and I moved up to the middle. I was pleasantly surprised at how well the car worked up there.”

Sheppard’s crew was not 100% sure on how they wanted to set up the car. “We had a lot of question marks before the Feature on how to go setup-wise. We ended up just putting it back exactly the way it was the last time we were here.” Sheppard came into the Showdown at Sundown with a strong run in non-Series dirt modified races. “It’s been good. When you’re up you gotta enjoy it because you never know when you’ll be down again.” Very few Super DIRTcar Series have eclipsed the 60-win mark. “It’s pretty cool being a part of that group, knowing the group of guys that followed the Series throughout the years, the best in the business. It’s a real honor put my name in the record books.”

Billy Decker was about as down on a runner up finish as anyone could be. Although the finish was a vast improvement over the last race, Decker is searching for more. “Sheppard was quicker the whole way though the race. We weren’t as good as we needed to be. These upcoming tracks finish a lot like this one does, so hopefully we’ll learn some things.” For the second race in a row Jimmy Phelps brought the 98h home on the podium. “It’s good company up here in the top 3. We’ve got some momentum going.”

The 100 lap Feature was only slowed for caution flags twice. The first one on lap 19 took the wind out of the crowd as home town favorite Larry Wight slowed to a near stop in turn four. Unfortunately, his night ended right there with a power steering failure and the no. 99L was scored in position 31. The other caution was for Danny Varin on lap 44. He too would pull into the pits for the rest of the Feature, ending his night. There was very little attrition overall and 27 of the 31 starters were running when the checkered flag fell.
Billy Decker took home the Billy Whitaker Cars & Trux Fast-Time Award with a lap of 14.285 seconds around the high banked Brewerton Speedway oval. Pat Ward, Billy Decker, Matt Sheppard, and Tim Sears Jr. enjoyed Heat Race wins as well.

The next  Super DIRTcar Series race is at Albany-Saratoga Speedway for the Big Show X, which is promoted by Series star driver Brett Hearn. The race is on Tuesday, June 26th and it will pay out $10,000 to the winner as well as earn them a guaranteed starting position at the 47th annual NAPA Super DIRT Week. 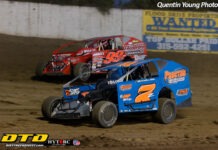