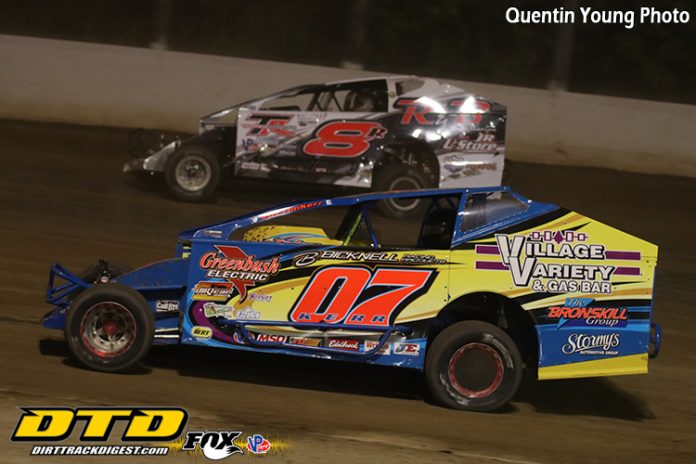 BREWERTON, NY – Tim Kerr had a rough couple weeks, from a violent crash two weeks ago to motor issues, but it all turned around as he held off Chris Hile and Pat Ward for the Brewerton Speedway victory.

Kerr grabbed the lead at the start of the 35-lap Modified main and quickly drove away from the rest of the field. A lap six caution for Chad Phelps slowing and Tim Harris spinning brought the pack back to Kerr, but only momentarily, as Kerr darted away again on the restart. Behind Kerr, Chris Hile moved around both Tim Sears Jr. and Andrew Ferguson to slot into second.

At halfway, the only car hanging with Kerr was Hile. Even then, Hile was a half straightaway behind Kerr, but as the lap counter clicked to 20 the gap began to visibly close. Behind the top two, Pat Ward had slid around Sears and was catching both Kerr and Hile. With ten laps to go, Hile had cut the distance to Kerr from its maximum of half a straightaway to just three car lengths.

As the field got the five to go signal, Hile had caught Kerr and Ward had caught both of them. The top three were under a blanket, with Kerr rolling the top while Hile and Ward experimented down low. Hile took a few looks under Kerr in the middle of the turns, but couldn’t complete the pass.

Over the final few laps, Kerr was having issues passing two lapped cars. However, these lapped cars were down low, preventing Hile or Ward from being able to make a move. Over the final circuits, Tim Kerr was able to hang on and score his first win of the season ahead of Chris Hile, Pat Ward, Tim Sears Jr., and Larry Wight.

“I can’t thank everyone at Gypsum enough, they gave us a motor to finish out the year,” Kerr said. “It’s a big deal to get back to victory lane, we were running pretty well. The track was fast tonight and you had to drive it the whole time. I started to change my line at the end, I saw a nose down there and knew I had to cut the exit off a little. I didn’t know who it was, but there’s twelve guys here that can win every week.”

The first of two Sportsman features saw Alan Fink grab the top spot very early on, cruising away over the 25-lap distance to another victory. Kevin Root slipped around Amy Holland halfway through the second event, rolling to his first victory at Brewerton this season.

Zack Babcock got to the front of the Mod-Lite field in the middle stages of the race, riding around the top to his first win of the year as the remainder of the field fought for the bottom. Evan Wright grabbed another 4-Cylinder victory in dominating fashion, but runner up Ray Bechler held the big trophy as track champion for the year, claiming the title by just one spot on track. The 4-Cylinder season ends a week earlier than the other three regular divisions, as the Empire Super Sprints take their slot in the lineup next week.