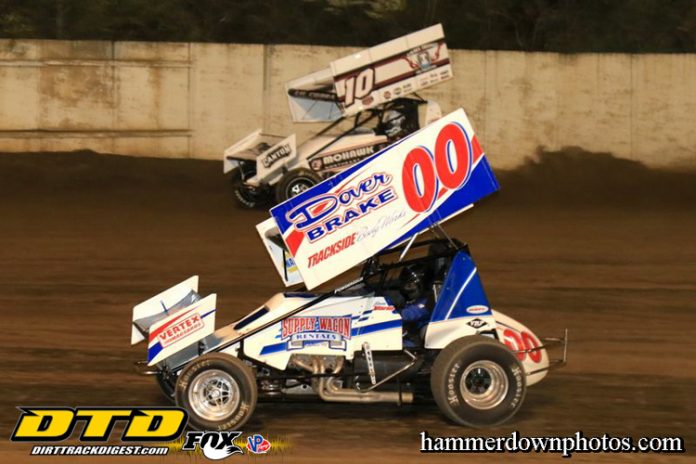 BREWERTON, NY – There is something about the late season event at the Brewerton Speedway for Lucas Oil Empire Super Sprint driver Danny Varin. The Fonda, N.Y., driver came into Friday night with two consecutive Brewerton wins in the Labor Day weekend kickoff event. He left with his third.

Varin had some luck on his side as won the first heat and then with the first pick of the redraw drew the pole starting spot for the 25-lap A-Main presented by E&V Energy, NAPA Auto Parts and Mach 1 Chassis. He led the entire feature event for his fifth series win of the 2018 season.

“We were alright tonight,” commented Varin. “I don’t know, it was a tough race. I screwed up a bunch of times, but starting position helped us out tonight. I was wheeling that thing. We were either going to put it in the wall or put it here in victory lane.”

Varin bolted to the lead at the start with Paul Kinney falling quickly in line behind him in the second position. Varin was dominant in the opening laps pulling away to nearly a straightaway lead. That pace forced him into traffic on lap six.

As the race progressed the traffic in front of Varin got thicker while Kinney, Sammy Reakes and Jason Barney were putting on a torrid battle for the second spot. Kinney continued to keep them at bay holding on to the second position.

The red flag was needed on lap 14 as Tommy Wickham’s car came to a stop with flames shooting out of the side of his car from under the hood. This negated the lead that Varin has amassed setting up the double-file restart.

Action picked back up, but was quickly brought under red a second time as Reakes, who was third, bounced over the cushion and ended up landing awkwardly over the bank outside of turns three and four. His car got several feet in the air before coming down hard on the rear of the car. Fortunately Reakes was able to walk away from the crash.

With back-to-back cautions, a single-file run to the green was next with Varin holding onto the lead. Behind him, Kinney and Barney battled hard for second. On lap 16 the pair came together in turns one and two causing Barney to do a 360 degree spin. He kept going, but fell back to the fifth position.

The last stoppage of the race came on lap 18 as Matt Billings took a tumble in turn three while battling with Steve Poirier. The duo went for the same spot on the track with contact causing Billings to flip several times. He wasn’t hurt. His car landed on all four wheels. He was pushed into the pits before he eventually rejoined the field.

For the restart Varin now had 10th place starter Larry Wight on his heels. Varin utilized the bottom of the track for the green allowing him to break away from Wight. Varin kept pounding the cushion with Wight working the extreme inside lane.

“I was messing with the wing there,” stated Varin. “If I pulled it back it was way too tight and I couldn’t rotate. Then I saw Larry (Wight) was second and I knew where he was going to be. He kept poking his nose under there. I got my wing back forward and we were too loose.”

At the checkered it was Varin earning the win. Wight, of Phoenix, N.Y., couldn’t make up enough ground on the bottom. He took home second.

“The bottom was pretty good for us, but as the race went on it got a little bit too slick getting in,” said Wight. “It seemed to me I’d lose two car-lengths getting in and I’d gain one coming out. Danny (Varin) had a really good car. I was hoping to get him on that restart. He got me on the jump. He went a little bit earlier than I thought he would. The rest is history.”

Barney regrouped from his spin to finish in the third spot in a night presented by his company 87 Speed. The Brewerton, N.Y., pilot had a good car, but wasn’t able to get to the lead duo in front of the hometown crowd.

“It was a good night,” mentioned Barney. “Danny (Varin) is tough to beat. When you put him out front he is even tougher. It was a decent point night. It could have been worse. I’m looking forward to tomorrow and the rest of the weekend. It’s going to be a great weekend of racing for us. I’m happy for all my family and friends that came.”

Coleman Gulick finished in the fourth after starting from the inside of the sixth row with Steve Poirier racing his way from the 13th starting position to finish in fifth. 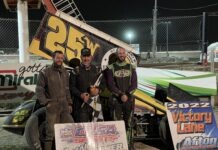