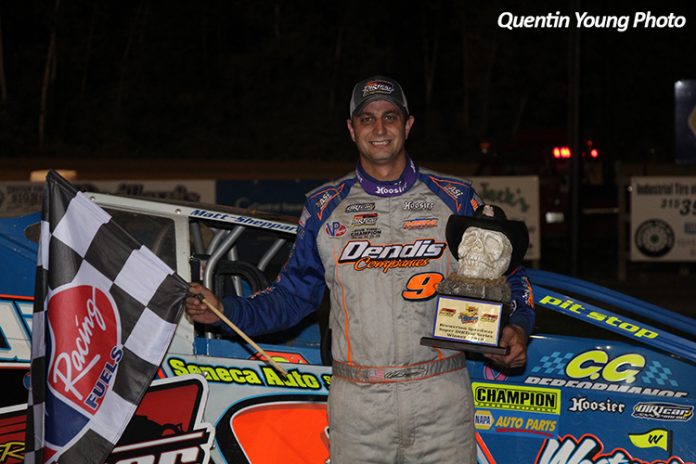 BREWERTON, NY – Matt Sheppard snatched the win away from Pat Ward with just a lap and a half to go in Brewerton Speedway’s 100-lap Duel At The Demon, claiming his fourth Super DIRTcar Series win of the year in dramatic fashion.

Tim Sears Jr. and Larry Wight went to battle in the beginning of the 100-lap feature, trading the lead through the opening laps. First, Sears went to the cushion to rocket around Wight on lap three, but Wight pulled the same move a handful of circuits later to regain the top spot.

By lap ten, the leaders caught traffic, and Ward used the lapped cars to slip by Sears for second, closing in on his Gypsum teammate. Wight had a moment on the cushion coming to complete lap 15, allowing Ward to take a swing at the lead, but Wight throttled down and held him off. Adam Roberts came to a sideways stop with 19 laps in, allowing the field to regroup and try again at the two red cars of Wight and Ward.

Ward remained glued to Wight when race pace resumed, never leaving Wight’s door. With Ward down low and Wight up top, Ward stuck the nose in front of Wight on a number of occasions, but never completed the pass. Meanwhile, Sheppard climbed from his starting spot of ninth up to fourth, closing in on the leaders of Wight, Ward, and Sears. Billy Whittaker put a halt to the leader’s battle, spinning to a stop on lap 35.

With every passing lap, Ward’s car seemed to be getting faster. On the restart, Ward was fast enough to finally snatch the lead from Wight, drawing even down the backstretch and completing the pass in turns three and four.

Before James Sweeting slowed for a yellow on lap 48, Ward had built up a lead of a second and a half, and didn’t seem to be slowing anytime soon. Within a couple laps after the field took the green, Ward’s lead had amounted to over half a straightaway, but Dave Rauscher and Rusty Smith got together to draw another caution on lap 58.

When racing resumed, Ward took off again, but Wight was now under fire for second. On lap 72, Sears dove down low and grabbed the runner up spot back, and Sheppard, who recently was as far back as sixth, followed through for third.

As the laps ticked away, Ward held on to a steady one second gap over Sears, now under pressure from Sheppard. Lapped traffic allowed Sears to close the distance, but Ward pulled away as lap 85 was shown on the scoreboard. Ward seemed well on his way to his first Super DIRTcar Series win in 13 years, but Chad Phelps slowed for a caution with ten laps to go.

Ward got a good restart, opening up a five car length lead. With Ward running the middle on entry and top on exit, Sheppard decided it was time to stop following Sears around the bottom and see if Ward’s lane had any juice left.

On lap 92, Sheppard slid around the high side of Sears and into second. Immediately, the advantage Ward had built up began to shrink.

Coming to two laps to go, Sheppard had cut the lead down to a car length. Even more important than that, Ward had two lapped cars battling side-by-side in front of him. Faced with a decision no driver wants, Ward chose to split the middle of Peter Britten and Rusty Smith, but the hole closed up exiting turn two.

Sheppard had the advantage of running second and dove to the bottom, driving by the two lapped cars and Ward. The move left Sheppard with a car length lead coming to the white flag, and Ward could not get back to him.

When the checkered flew, it was Sheppard grabbing his fourth Brewerton Super DIRTcar Series win in a row, only leading two laps in the process. Ward finished a disappointing second, followed by Sears, Erick Rudolph, and Wight.

The win was Sheppard’s fourth in a row at the track, winning Super DIRTcar Series features in the September of 2016, 2017, and 2018, also along with the second event at the track back in June, where Sheppard led all 100 circuits.

“Our car was real good, I think Pat was the class of the field but he got jammed up behind the lapped cars,” Sheppard said. “I was able to get low down the backstretch and get underneath the lapped traffic easier, and that was really the key. At RPM (where Sheppard finished third after leading late), a lap 90 caution seemed to be my undoing, but tonight it got us to victory lane. This is the same car we’ve won the last three of this race, so until we get beat we’re just going to stick with the basics.”

Chris Mackey led early in the Sportsman 50-lap affair, but never got comfortable out front. For the first half of the race, Mackey was constantly challenged by no less than three or four others for the lead, including Alan Fink, Kevin Root, Corey Barker, and more. By halfway, Mackey had somehow hung on up to that point, often three wide with Fink and Root for the lead.

As the lap counter increased, so did the pressure. Root slipped by Mackey to complete lap 33, but Root’s lead was short lived. The next time around, Fink threw a slider on Root, grabbing the top spot away. After three different leaders in three laps, Fink established consistent control, looking to run away and hide. However, Root never let him get away, but hanging close was all Root could do. Alan Fink claimed victory in the DIRTcar Sportsman Series 50 over Kevin Root, Corey Barker, Chris Mackey, and Will Shields.