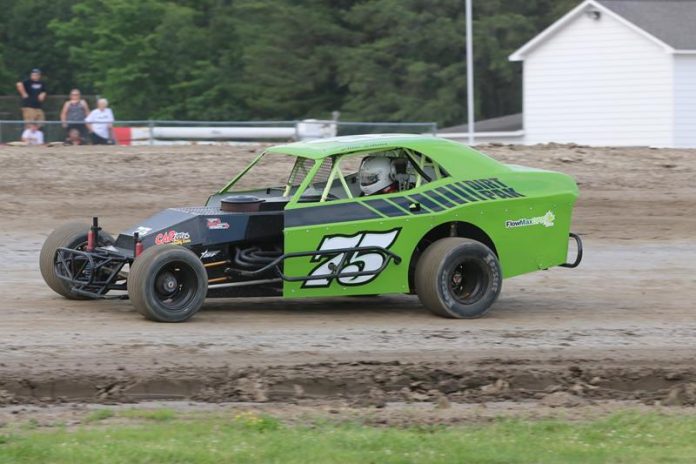 NORTH AUGUSTA, ONT – The Dirt Modified Nostalgia Tour’s 2019 season has been off to somewhat of a slow start. Weather has been one of the big factors affecting car counts even as recently as the last race at Plattsburgh Airborne Speedway a few weeks ago.

The forecast for this coming weekend in Central NY is looking great with Brewerton Speedway this Friday, July 12th, followed by Fulton Speedway on Saturday, July 13th.

When first announced on the schedule both Brewerton and Fulton were a couple of the bucket list tracks that seemed to garner the most interest from racers. With about 25 confirmations thus far and a few more to be announced in the coming days the DMNT will finally be able to split it’s two divisions with separate features, a longtime goal of the series.

Horseheads, NY native Bob Johnson will lead the way in the Modified division where he will see some fast company over the course of the weekend with the vastly improved Megan Ciglich of North Augusta, Ont sitting 30 points back of Johnson. Land Of Legends feature winner Jon Kuleszo, 2018 Brockville Outlaw Champ Kenny Polite, 3 time Eastern Ontario Champions Jason Powers and Paul Billings and former EOVSCC / DMNT Champion John Stanley should make for extremely competitive features both days. There may yet be a few surprise additions as well.

Over on the Nostalgia class side of things points leader Brad Litzenberger of Romulus, NY looks to continue his successful 2019 campaign, Brad had a win at Penn Can Speedway earlier this season. Scott Gauthier of Mooer’s, NY will also be in attendance at both tracks, Gauthier won the division at Plattsburgh Airborne a few weeks ago.


Darrell Wilson of Merrickville, Ont returns to action in the class as well as he resumes his chase of Litzenberger in the points hunt. Jim Hilimire, Tim McColman, Tim Charland, Craig Chisom and a host of others will give the fans a chance to see some of the older machines in action.

The action starts this Friday night when the green flag drops at Brewerton Speedway at 7:30 pm.

The 2019 Edition of the DMNT is brought to you by: Swagger Factory Apparel, CARtoons Magazine, SuperGen Products and by FlowMaxDPF.