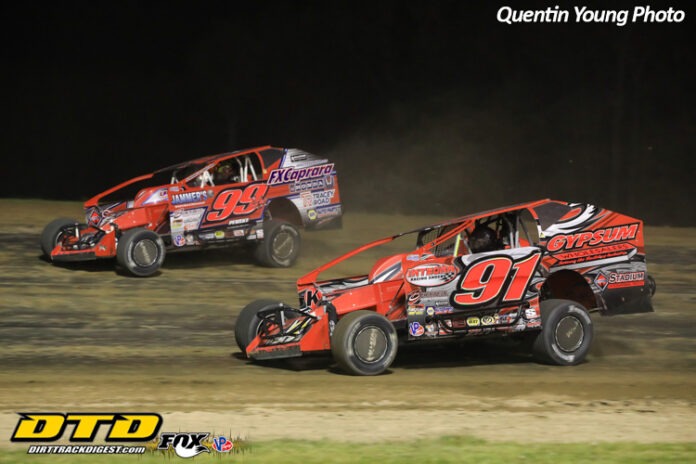 BREWERTON, NY – With just one test session in 2020, Brewerton Speedway has not hosted a full race since October of 2019. 582 days later, the Big Block Modifieds took the green once more, and fans witnessed a thrilling drive by Billy Decker to steal the win from Larry Wight and Jimmy Phelps in the final circuits of Brewerton Speedway’s return to racing.

Chris Hile led the opening portions of the 35-lap Modified main, setting pace early over Wight, Phelps, and newcomer Mike Maresca. Brewerton’s season-opening events seem to frequently be contested on the cushion, with this being no exception, with Hile and frontrunners blasting the top. A lap eleven restart saw Hile choose the bottom, proving to be the wrong move, as Wight and Maresca slipped by up high for first and second.

Phelps followed suit to take third from Hile, and by halfway, the top three of Wight, Maresca, and Phelps found themselves within a couple car lengths of each other and ready to enter traffic. Phelps began to pick up the pace as the lap counter clicked 20, pressuring Maresca for second and securing the spot on lap 24. Maresca still was very much in the fight, right up until he headed to the infield with mechanical issues on lap 27. As Phelps looked ready to pull the trigger on Wight for the lead, the yellow waived.

On the restart, Decker drove past Hile for third, up from the 13th starting spot. With six laps left to work with, Decker had two more cars left to pass en route to the front. With most of the top cars up top throughout the night, the cushion was clogged, as Wight blasted the curb all the way around and Phelps was running a slider line. Decker had no other option than the bottom, but made it work well. Three-wide for the lead saw Decker officially scored second on lap 33, then the leader on lap 34. With the checkered waiving, it was Decker nosing out Wight by about eight feet for the Brewerton Speedway season opener. A close third was Phelps, followed by Hile and Tim Sears Jr.

“That was an excellent race out there, and I’m glad we have full stands here to see it,” Decker said. “It was tough sledding coming up through there, a lot of slicing and dicing and a ton of side-by-side racing. We tweaked it a little after the heat, and I was as good as anyone up top but maybe a little better on the bottom. The top started to give up a little at the end so I had to make the bottom work, it required a ton of patience to not overdrive the entry with all the battling going on, but we made it stick.”