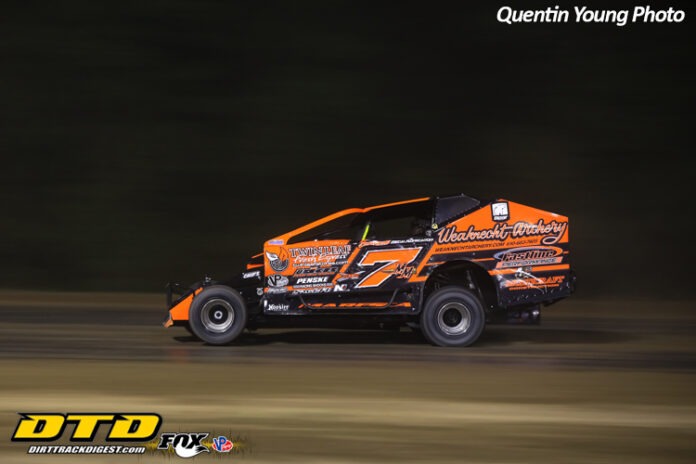 BREWERTON, NY – In last week’s season opener, Mike Maresca showed good speed. However, a mechanical issue slowed him during the later stages of the race while running fourth. This week, no such mechanical issues, as Maresca led most of the 35-lap feature and held off a late charge by Jimmy Phelps for his first Brewerton Speedway feature win.

Quick movement from Maresca’s #7mm saw the driver move from his fifth starting spot to the lead in the opening three laps, charging by Roy Bresnahan for the top spot. A pair of early yellows allowed deep starters to make huge gains in the first handful of circuits, with Tim Sears Jr., Jimmy Phelps, and last week’s winner Billy Decker driving into the top five by lap five. Once Sears, Phelps, and Decker reached the front from 13th, 15th, and 17th respectively, they were set up for a battle of their own.

On a lap six restart, Sears followed Maresca to the bottom, so Phelps went to the top. Up top, Phelps nearly got by both cars, but Maresca defended well and allowed Sears to regain second. A lap ten restart saw Phelps return the favor to Sears, with Decker following through to push Sears back to fourth. While these three went at it, Maresca had built up a steady two-second lead at halfway.

By lap 20, Phelps had started to distance himself from Decker and Sears, while holding the gap to Maresca steady. Maresca and Phelps ran similar lines, sliding from the middle to the top in turns one and two, and hugging the bottom of turns three and four. As the laps wound down, Phelps slowly chipped away at Maresca’s lead. A switch to the bottom in turns one and two accelerated Phelps’s progress, drawing within a car length in the final laps. Lapped traffic became a factor, forcing Maresca to the bottom on the final lap and stalling Phelps’ progress. With the checkered waiving, it was Maresca narrowly taking his first Brewerton Speedway win over Phelps, Sears, Decker, and Larry Wight.

“We wanted to come here and race against the best guys, and we knew it would be a real challenge,” Maresca said. “Tonight was definitely slick and the car was hooked up. We were real good, and I saw Jimmy poking his nose down low at the end. With turn one being so sharp, going in there sideways almost lets you see behind you, so I was able to see where he was. The lapped cars forced me off my line some and I had to drop low on the white, and luckily Jimmy didn’t roll around me up top on that last lap.”