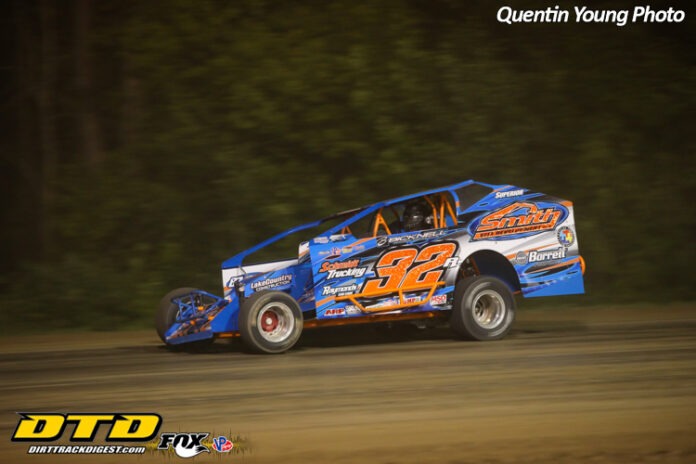 Torrey Stougtenger and Tyler Trump battled for the lead on a set of early restarts, with Trump taking command from Stougtenger on lap five. Davis started sixth, but worked quickly to second on lap eight, driving under Stougtenger. Switching lanes to the top, Davis went by Trump a lap later to grab the lead.

Hile started twelfth, but like Davis, picked off cars at rapid pace. By lap 12, Hile found himself in the runner up spot, but a fair chunk of space behind Davis. As the laps clicked down, the gap shrunk, with Hile within striking distance by lap 22. As Hile began to search for options, Trump was busy holding off Larry Wight for third. However, a lap 25 caution threw a wrench into the battle brewing up front.

On the restart, Hile tossed a slider at Davis, with Davis responding with one of his own to keep the lead. With Hile’s broken momentum, Wight slipped by Hile for second following a brief fight, but this allowed Davis to build a small buffer between him and the pack. Wight inched in on Davis, but the lap counter clicked 35 and the checkered waived, with Davis scoring his second career Big Block Modified win. Wight came home second, with Hile, Jimmy Phelps, and Mike Maresca completing the top five.

“I figured Chris would try something, but I wasn’t anticipating right on the restart,” Davis said of his sliders with Hile. “It caught me off guard, but I figured if he got me in one, I’d do one in three. It stuck, I don’t know how close they were behind me, but the car was clicking tonight. I didn’t feel real good on the bottom, but after the passes with Chris I just made sure to hit my marks and keep it straight.”