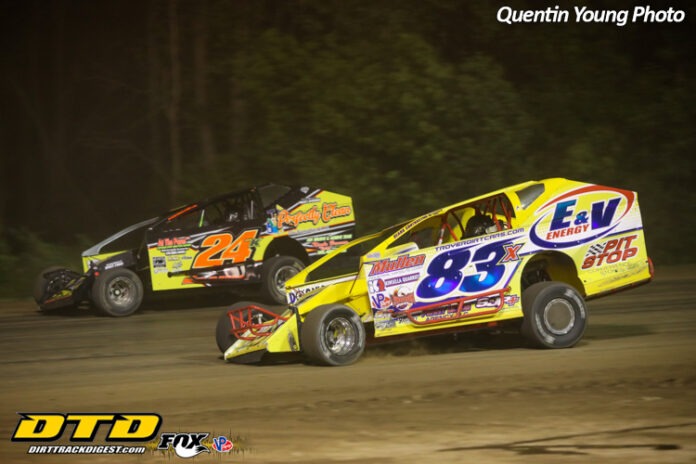 BREWERTON, NY – Tim Sears Jr. led the second half of the Big Block Modified 35-lap event at Brewerton Speedway and notched his first Big Block win of the year, but the win was far from easy. Sears held off a rampant charge by Larry Wight in the final laps, splitting lapped cars on the last lap to keep Wight at bay.

Torrey Stougtenger showed the way through the first laps of the Modified feature, setting sail until a set of early wrecks on laps six and seven brought the field back to him. Aided by these yellows, Sears climbed from his 14th starting spot to third by lap seven. Sears wasn’t done, grabbing second on the restart and going after Stougtenger.

After trading the lead, Sears took the top spot for good on lap 12. Joe August slipped into second at halfway, looking for his first ever win as he kept Sears within striking distance. Behind him, Larry Wight had climbed from 19th to fourth and was looking for more.

Following a lap 21 restart, Wight took second from August and went after Sears. Slowly but consistently, Wight reeled in Sears, but both cars seemed happier on the cushion, as Wight couldn’t make the pass stick on the bottom. As the white flag waived, lapped traffic was side-by-side in front of the leaders. Sears narrowly skated through the middle of the two cars, while Wight kept it planted on the top. However, the hole closed up for Wight, allowing Sears to slip away and score the win. Wight finished second, with Tyler Trump, Jimmy Phelps, and Tom Sears Jr. completing the top five.


“We made it 35 and three-quarter laps, something in the driveline broke,” Sears said with a push truck behind his car. “We had that heat race wreck and I knew it was a matter of time before something let go, and thankfully we made it to the end. The car was good tonight, even with the rear end all bent out. I knew with Larry restarting fourth that he had to be right on me at the end, so I just had to go for it and drive through the middle of them all. Thankfully, that allowed us to hang on.”