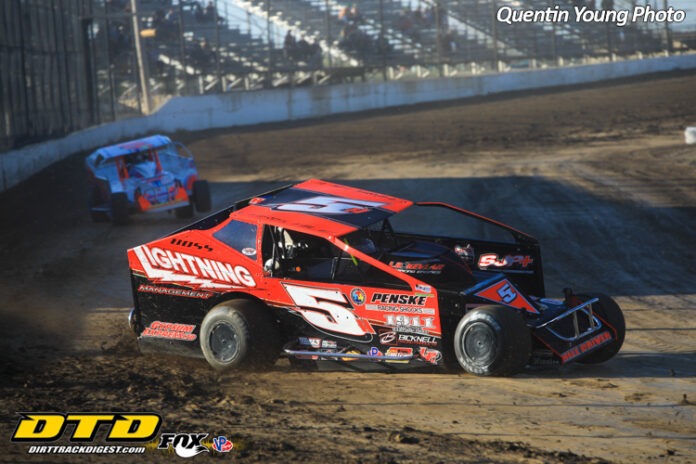 BREWERTON, NY – Chris Hile led the charge around a lightning fast Brewerton Speedway, taking control of the field just prior to the halfway mark of the Big Block Modified feature and driving away from Larry Wight for his first win of the year.

Tim Harris and Jeff Taylor battled for the lead in the opening stages of the 35-lap feature, with Harris leading the first ten circuits before Taylor finally slipped by. As Harris and Taylor battled, Hile was making moves from the middle of the field, charging from 13th to third in the first ten laps. Following a couple quick yellows, Hile went to second and then the lead by lap 11.

Behind Hile, Wight was the next biggest mover, coming from 17th. After disposing of Taylor, Wight went chasing after Hile, within a pair of car lengths at halfway. However, Hile settled in on the cushion, matching Wight’s line, and slowly began to pull away. With ten to go, Hile had stretched the gap out to over half a straightaway, but traffic was coming.

In traffic, Hile had to deviate off his lane more than Wight, and with five laps left, the lead was halved. Things started to flow better for Hile in the final laps, with traffic playing into Hile’s hands and stalling Wight’s charge. With the checkered waiving, it was Hile winning over Wight, Tom Sears, Billy Decker, and Jimmy Phelps.

“It seemed like an ongoing long night with the rain and power outage, but hats off to the track crew,” Hile said. “I haven’t raced on a track this smooth and fast in a while, the place was beautiful. It was a lot of fun coming from deep, we just got up there quick and just set sail. Getting up through there fast requires a little bit of luck, just picking the right lanes and hoping that’s what moves. Luckily things worked out good for us, and we were able to bide our time and save our stuff to pick off the front few cars.”