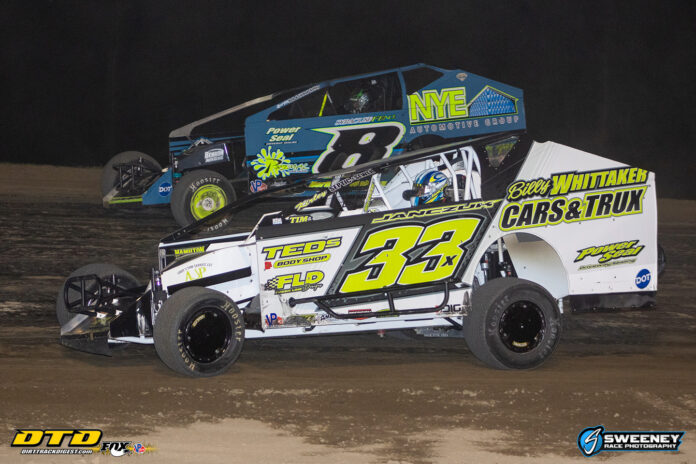 BREWERTON, NY – There are already quite a few ‘Money Matt’ nicknames in the racing world, although Matt Janczuk may be becoming the Money Matt of the Sportsman division. Janczuk one-upped his second place at Weedsport to claim the second race of the DIRTCar Sportsman Series in the Central Region at the Brewerton Speedway.

A packed crowd was greeted with a four-wide salute as the stars and cars of the DIRTCar Sportsman Series prepared for forty laps around the tricky ‘D-Shaped Dirt Demon’ that is the Brewerton Speedway. Richard Murtaugh Jr. and Janczuk led the field to the green flag, and off the initial start Murtaugh grabbed the lead for the opening circuits. A flurry of battles took place all over the speedway as the top five created a small gap. Quinn Wallis and Max Hill battled early for spots in the top-fifteen. It was fitting that this pair dueled early, as the pair both decided to skip their graduations to race at Brewerton. For Wallis, his night had already been good, as he dethroned Chuck Powelczyk’s from his winning streak in the Four Cylinder division.

The race had a fair amount of attrition as cautions slowed the pace of the race down as the yellow flew on lap thirteen. The first incident was for Dalton Rombaugh, who stopped in turn one. The cause was his left front wheel going rogue; the wheel didn’t even bother to put in a two weeks’ notice as it left Rombaugh’s car and made a mad dash for freedom in the infield. Kyle Devendorff spun coming to the take the restart in turn three, setting the field up for another try. The field made it through turn one, but it was without Jeff Prentice, who found himself backwards, stacking the field up once again. The fourth try was successful, and Alan Fink made a bid for the lead off turn two. Fink, who had excellent runs of the topside of turn two all night long, could not muster up enough momentum in the opposite end of the speedway, as Janczuk held him off for now.

As the field began to settle in, the caution flew again to stack the field up on lap 24. On the first restart attempt, Fink caught the front stretch wall and slowed on the backstretch, with many forced to take evasive action. After a quick once over on Fink’s car pit side, he continued. On the next restart attempt, an incident took out Zach Sobotka, once of the favorites to win going into the night. Sobotka and Chris Mackey made contact and Sobotka slammed the outside retaining wall, doing severe damage to his no.38 machine. The car was double hooked off the speedway, putting a firm end to the night for Sobotka.

The ensuing restart saw Janczuk jump out to another lead, but Chris Mackey was beginning to apply pressure. Mackey used the same top groove Alan Fink had found earlier to almost surpass Janczuk entering turn three, but the bottom proved to be too powerful for now. Two final cautions packed the field together for one last time. Murtaugh’s solid run came to an end as the no.33 pulled into the infield with a mechanical problem that appeared to leave some debris on the speedway, forcing a yellow. A final yellow flew on the restart for Matt Caprara. In the final 6 lap run, Janczuk held off one last ditch challenge from Mackey on the top to claim the win, as Mike Fowler completed the podium. Amy Holland and Nick Guererri completed the top five.

“I’m not really sure how we were so fast tonight”, said Janczuk. “It’s a testament to how good this Teo Pro Car has been. Figuring this place out is tricky. We don’t get a lot of seat time here either, it’s just been crazy how good this car has been.”

“This class is always growing, and it’s awesome to be so competitive,” said Janczuk. “I don’t really know what this place does, so it was a bit surprising to see Chris [Mackey] up there. I felt Alan [Fink] giving me a push up there a few times when I’d slide up the track on the straightaways a few times. I was able to cover off the top on the exit of one and two and it seemed to keep them at bay pretty well”.

The DIRTCar Sportsman Series returns in less than a week for another Central Region event at the Can-Am Speedway to help kick-off New York Speedweek for the Empire Super Sprints. 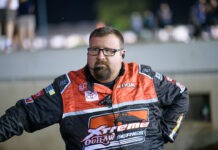