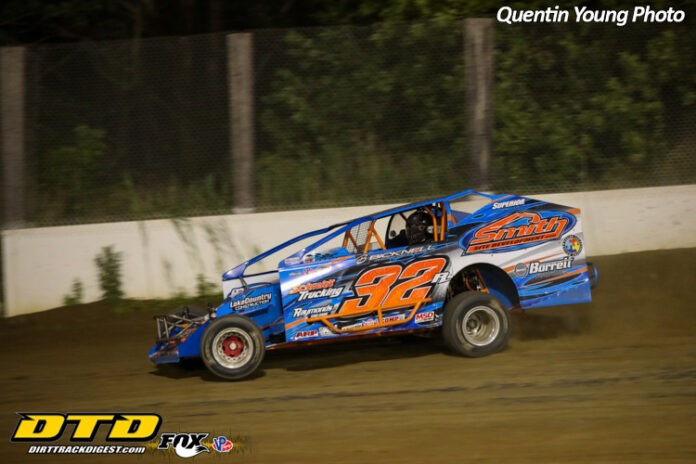 BREWERTON, NY – Ronnie Davis III took the lead at halfway in the 35-lap Modified event at Brewerton Speedway, holding off a late charge by Mike Maresca for his second win of the season at the track.

Ben Bushaw held steady out front for the first third of the Big Block Modified feature with his 358 motor, putting a solid gap over Jeff Taylor and Tyler Trump. The first yellow of the race flew on lap 14, but Bushaw skated away from Taylor again. A few laps later, Taylor hopped the cushion, which allowed Davis to slide by both him and Trump to reach second from his seventh starting spot.

A lap 18 yellow saw Bushaw pick the bottom, giving Davis his preferred top line. With Davis where he wanted to be, he quickly took the lead and ran away, building up a two second lead in a hurry. Maresca was making headway too, up to fourth from 14th following the restart. After passing Trump for third, Maresca went to work on a resilient Bushaw, only able to second after a lap 26 restart.

Once in second, Maresca hung close to Davis. Davis stayed faithful to the top, while Maresca tried other options lower on the track. With a few laps left, Maresca showed a nose under Davis, and coming to the white flag, Davis switched to the bottom. Maresca nearly pried under Davis, but with the checkered waiving, it was Davis winning by a car length over Maresca. Trump finished third, followed by Larry Wight and Jimmy Phelps.

“We started off the year a little rough, but I’ll feel off my game going to Fulton with the 358 tomorrow with how hooked up the Big Block has been lately,” Davis said. “It’ll feel like jumping back in a crate car compared to this, this Big Block team has worked hard and it’s showing. I was a bit surprised with Bushaw picking the bottom, but I guess I was okay with it. I saw Mike stick his nose down there late, and I changed up my line a little just to throw something at him. Not necessarily block, but hopefully break his momentum by doing something different, and we were able to hang on.”