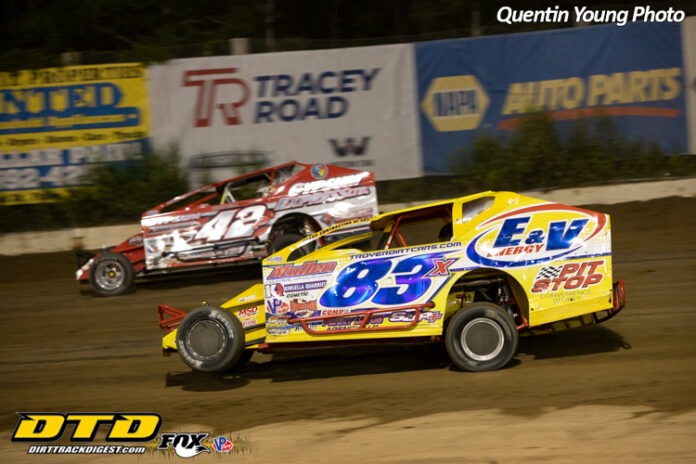 BERWERTON, NY – Tim Sears Jr. joined the multi-win club at Brewerton Speedway, passing Pat Ward for the lead in the later stages of the 35-lap event for his second Brewerton triumph of 2021.

Ward slipped by Roy Bresnahan a handful of laps into the Modified feature, with Jeff Taylor following through to take second. Taylor, a Modified rookie, stuck with Ward quite well through the early stages of the race, taking an occasional peek alongside Ward. Meanwhile, the #83 of Sears kept clicking higher and higher on the scoreboard, reaching fifth before a lap 9 yellow after starting eleventh.

Sears climbed to third by lap 12, but the top duo of Ward and Taylor had separated themselves. Sears closed in some, but a lap 18 yellow helped erase the rest of the gap in a hurry. Sears got by Taylor for second on the restart, then worked the bottom on Ward while aiming for the lead.

Sears and Ward remained door-to-door for a number of laps, with Sears on the bottom and Ward in the middle. Sears finally broke free on lap 25, leaving Ward to fend off high-flying Kevin Root for the runner-up spot. With the checkered waiving, it was Sears taking his second win of the season at Brewerton, while Root, Ward, Jimmy Phelps, and Billy Decker rounded out the top five.

“This thing was good, we didn’t touch anything all night long,” Sears said. “We’ve been hit and miss here this season, but we’ve been gaining on it recently and been much more hit. For a while it seemed like every time I was about to clear Pat, I missed the bottom and he stayed at my door, but eventually I got going and we drove away.”

The Reagan Companies Night at The Speedway July 23 Results