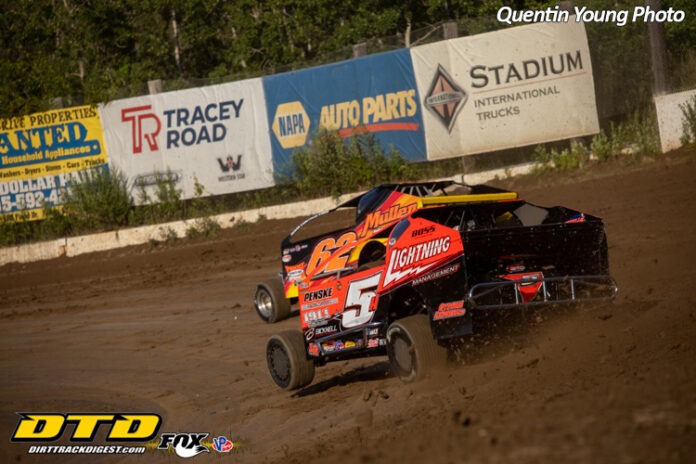 BREWERTON, NY – Chris Hile held off Billy Decker throughout the back half of the Big Block Modified feature at Brewerton Speedway, taking his second checkered flag of the season.

Jeff Taylor led the way early in the 35-lap Modified feature, showing quick pace as Roy Bresnahan, Hile, and Decker battled for second. While the three-car battle for second went on, Taylor was motoring away, gapping second-place Hile by about a straightaway by lap 10. Once the runner-up battle settled down, Hile began chasing after Taylor, but smoke from under Taylor’s #11 looked to possibly be a bigger issue than Hile.

Hile caught Taylor using the top side, but with Taylor running the middle in the turns and floating to the wall on the straights, Hile went to the bottom to make the pass for the lead on lap 19. Decker, not far behind Hile, also slipped by Taylor, with Taylor shutting the motor down soon after and bringing his car to the pits.

Following a yellow for Taylor, Hile fired well, leaving Decker to fend off Larry Wight as Hile ran away. However, a rash of late mechanical problems meant a trio of cautions in the final ten laps. Each restart, Hile held steady out front, reaching the checkered first for his second win of the year. Decker came home in second, followed by Wight, Jimmy Phelps, and Tim Sears Jr.

“That one was nervewracking with all the yellows at the end,” Hile said. “I knew we had fast company behind us with Decker and Larry, but we stuck to our guns and pulled it off. I was driving through the little bit of textured spots on the track, it had a little bit of moisture in some of the spots and we were able to launch off of them. We just had a very steady car tonight that allowed me to do things like that and move around wherever I needed.”