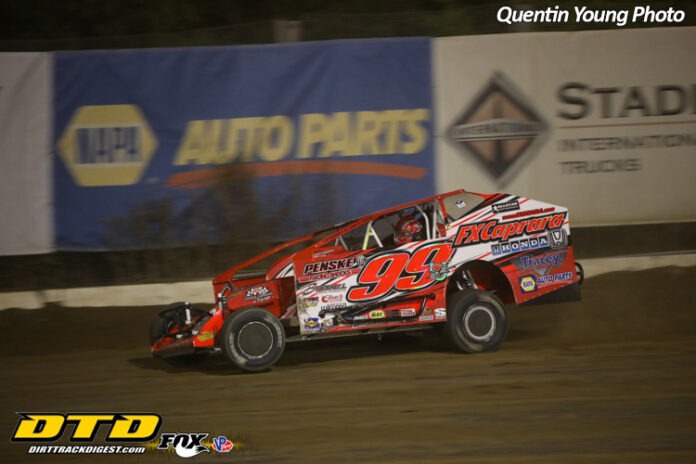 BREWERTON, NY – The top two in the points standings, Larry Wight and Jimmy Phelps, had eight and nine top five finishes in the nine Modified feature events this season. Despite just one finish outside the top five between them, neither had got a win. Wight changed this Friday night, getting by Jeff Taylor at halfway and scoring his first victory of the year at Brewerton.

Taylor was the man out front at the start of the 35-lap feature event, with Jim Witko his early chaser. An early caution knocked win contenders Billy Decker and Tim Sears Jr. out of the event, with co-points leader Jimmy Phelps getting substantial damage. The other co-points leader, Wight, blasted to third by the completion of lap three.

After working over Witko, Wight moved into second on lap nine. By this point, Taylor’s lead was nearly a straightaway, but Wight closed in quick. Using a lapped car as a pick, Wight dove under Taylor to lead lap 16.

From there, Wight ran away from Taylor, only hindered by a lap 23 caution flag. With Taylor and Witko battling for second, Wight slipped away and scored his first Brewerton win of the year. Witko barely beat Taylor to the line to steal second, with Witko ending up backwards following the finish. Chris Hile came home fourth, with Ronnie Davis III placing fifth before being collected after the checkered in the incident for second.

“We’ve been so close and had decent setups, but always seem to run out of time,” Wight said. “Luckily tonight we hit it for the track conditions we got, and we finally got a good starting spot with eighth. There’s so many fast cars now that you have to be aggressive super early, and luckily we were able to pick a handful off in the first couple laps to make it easier later in the race.”