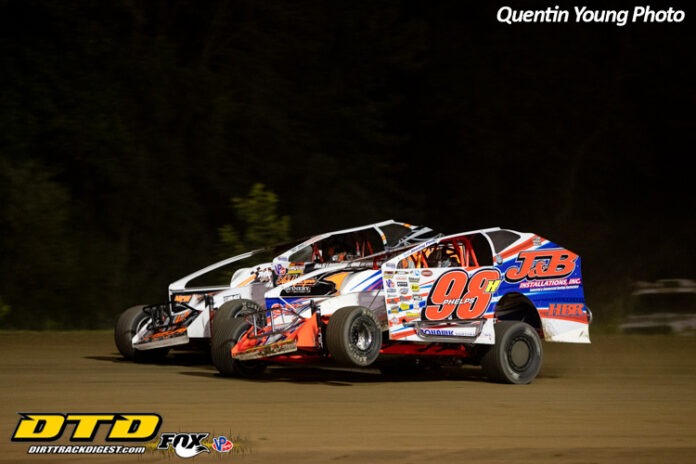 BREWERTON, NY – Two drivers have separated themselves from the field at Brewerton Speedway, being Jimmy Phelps and Larry Wight. Both drivers have only one finish outside the top five this year, with Wight scoring his first win in the speedway’s previous event. This time, it was finally Phelps’ turn to crack into the win column, scoring his tenth top five finish in eleven starts – this time a victory. Phelps reached the lead early in the Big Block Modified event and never looked back.

Chad Phelps led over Tyler Trump in the early stages of the 35-lap Modified feature, with quick cautions on lap three and six slowing the field. After starting tenth, Jimmy Phelps found himself fourth before the lap six yellow, and blasted to second on the following restart. With Chad Phelps high, Jimmy Phelps went low to take the lead on lap 9.

By halfway, Jimmy Phelps had stretched the lead out to nearly a straightaway, with Chad Phelps left to fend off Jeff Taylor and Tom Sears Jr., with Sears taking third from Taylor on lap 25. A yellow immediately after Sears’ pass reset the field and got rid of traffic, but Jimmy Phelps looked strong and pulled away. Sears slipped under Chad Phelps to take second with a handful of laps left, but Jimmy Phelps was long gone.

Just as things seemed to calm down, a yuke tire being knocked into the racing lane with two laps left forced a yellow, eliminating Jimmy Phelps’ lead. However, Jimmy Phelps fired well and held Sears at bay for his first win of the season. With Tom Sears Jr. coming home second, Chad Phelps finished third, followed by Larry Wight and Tim Sears Jr.

“We’ve been good all year, but we’ve just been third and fourth,” Phelps said. “We just got through traffic really well and got to the front quick, we were able to save our stuff and tire by doing that. We got through traffic clean, and just held steady out there. We made a change to Dig Race Products shocks recently, and some cars are good but just don’t fire well on restarts. Tonight on the new stuff we restarted really well and gave us that last little bit we needed.”