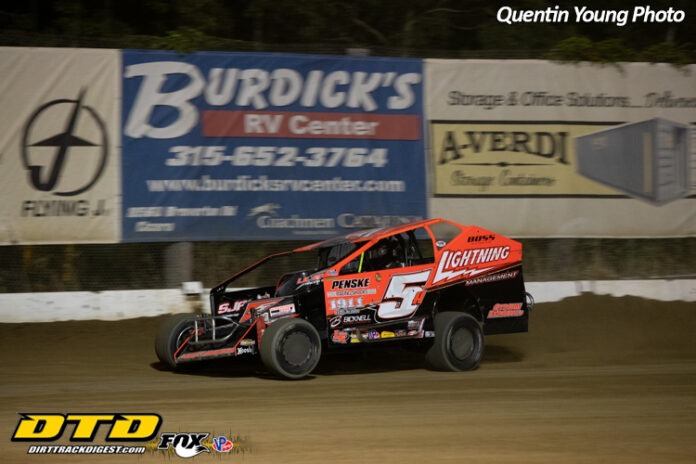 BREWERTON, NY – Chris Hile started seventh and quickly found himself near the front in the 35-lap Modified main event at Brewerton, slipping by Pat Ward halfway through the race to take his division-leading third win of the season. Just behind Hile, Jimmy Phelps came out victorious in a close title fight with Larry Wight, with Phelps scraping up a couple late passes to grab his fourth Brewerton Speedway championship.

Gil Tegg led the opening few laps of the Modified feature, before a lap three yellow set up a restart. Pat Ward used the restart to his advantage, taking the top spot from Tegg while Hile followed through to grab second shortly after. Ward held a comfortable lead over Hile for the next stage of the race, until a lap 13 yellow slowed the pace and bunched up the pack.

With Ward low, Hile went high, and after a few laps of battling, Hile took the lead on lap 17. Behind the top two, eyes focused on Wight and Phelps, with Phelps coming into the final night of points with a three position lead over Wight. By lap 21, Wight had reached third, while Phelps sat sixth. Hile had worked out to a quite large lead by this time, leaving Ward to fend off a motivated Wight.

A lap 27 yellow nixed Hile’s lead, but Hile stood steady in the final laps, pulling away from Ward and Wight to notch his third victory of the season. As Hile took a convincing victory, Ward barely held off Wight to come home second. Phelps made a late jump on the board from sixth to fourth, with Billy Decker fifth. With Phelps finishing just behind Wight, Phelps sealed down the Brewerton Speedway track title by eight points.

“Honestly, I didn’t think we were going to be that good early on,” Hile said. “I was just trying to roll the bottom and got forced up top, and it felt good. This car has been really good on momentum all year and with a fast track like this, we just kept coming up through. The track never really slowed down through the race so we just stuck with what was working.”

Fourth on track was good enough for Phelps to grab his fourth Brewerton championship, this one in close fashion. With Wight running a handful of spots ahead of Phelps most of the feature, the title fight was close all race.

“I didn’t think we were going to get that one,” Phelps noted. “Once the track slicked off a little we could get it to turn. With the new Dig shocks we just have so much grip that it made it hard to rotate in the middle. This car has been great all year and my team has been great all year, and this is their championship. Larry and I went back and forth all year, his season mirrored mine, but it was just my turn on top.”