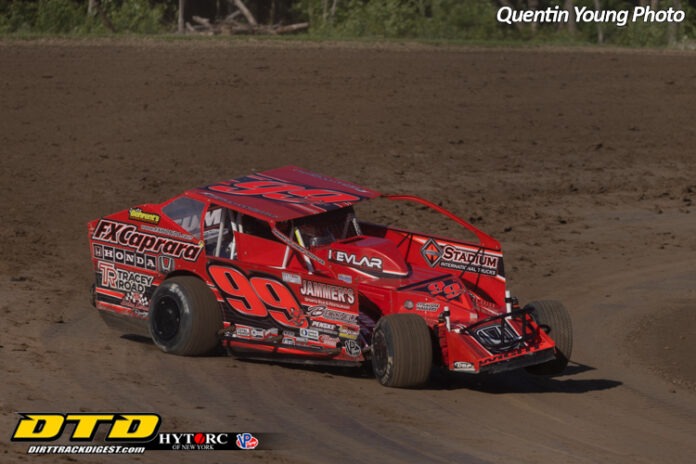 BREWERTON, NY – Slower was faster on Friday night at the Brewerton Speedway.

Larry Wight took full advantage of the slick track conditions to ride the top to his second win of the 2022 season at the ‘D-Shaped Dirt Demon.’ Wight made a late race move to get by Gil Tegg Jr., to pick up the victory in the 35-lap affair.

“The track was super hard and super slick tonight,” stated Wight. “I was just searching for traction. They put a little bit of water down when we did the autograph session. I saw it when we came out and I was hoping it wasn’t going to burn off. It seemed like no one wanted to flirt with it. We went up there and gave it a shot.”

Andy Noto brought the field green and led the opening laps as he was chased by Tegg. Tegg stayed close to Noto’s No. 19x in the early go.

It remained Noto and Tegg for the lead in the first third of the race. Tegg got even with Noto on lap nine driving up next to Noto as the pair exited turn four. They stayed side-by-side for the next few laps before Tegg was able to get by on lap 12 after slight contact.

With Tegg leading, Wight was working hard coming through the field after starting 12th. Wight utilized the extreme outside of the speedway while Tegg continued working through the middle and bottom grooves.

Wight moved into the runner-up position on lap 15 allowing him to begin to apply pressure to Tegg. Tegg kept Wight at bay in traffic and remained the leader when the first yellow was necessary for a spinning Jeff Taylor in turn one on lap 25.

The restart was all Wight needed as he powered to the high-side in turn one at the green allowing him to wrestle the lead away from Tegg at the exit of turn two. Tegg tried to stay close in turns three and four, but Wight was too much.

“Gil is a good driver,” mentioned Wight. “He’s very good to race against. He was making it tight there. I don’t think we ever touched. He was using the track to his advantage as the leader. I didn’t want to see that restart. Luckily, it was double-file and I was able to get run on the outside on the get-go. We’ll take it. Hopefully we can keep it rolling and get things back in line.”

Another caution was necessary as Jackson Gill spun on lap 27 giving Tegg another shot at Wight. Wight worked the top to perfection at the green keeping his No. 99L at the front of the field.

Over the final eight laps it was all Wight as he drove his Bicknell to victory lane for the second time this season at Brewerton.

Tegg has his best run to date finishing in the runner-up position while Tim Sears Jr., advanced from 14th to complete the podium.

Chad Phelps finished in the fourth spot with Ronnie Davis III completing the top five at the checkered flag.

Dale Caswell who is a past IMCA Modified Champion with 41 wins at the speedway and just as talented and winning driver in the Late Model racer can now put his name in the Brewerton Speedway record books as a DOT Foods DIRTcar Sportsman feature winner.

In the 25-lap feature, Caswell would lead every lap enroute to a celebration in victory lane with family and friends.

The win didn’t come easy as he had to hold off late race challenges from former track champion and the division all-time feature winner Alan Fink and Amy Holland who was right there waiting to take advantage of any mistakes by the top-two. Cody Manitta who graduated from high school that day and Tony Finch II completed the top-five.

Tucker Halliday won his first career feature win on August 9, 2019. Friday night, Halliday picked up his second career win in the division as he was the class of the field in the 20-lap Mod Lite feature. Halliday held off Mike Mullen, Joe Garafolo, Kyle Demo, and Zack Babcock who finished second through fifth.

The Tracey Road Equipment DIRTcar Big Block Modifieds have the week off for the Super DIRTcar Series event at Albany Saratoga.