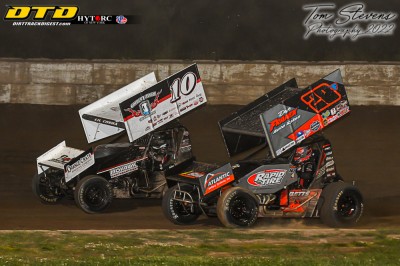 The 2022 Empire Super Sprints (ESS) Lucas Oil Tour CNY Speedweek begins at Can-Am Speedway on June 29, continues to a new track to speedweek, Thunder Mountain Raceway on June 30, back up north to Brewerton Speedway July 1 and finishes at Fulton Speedway on July 2. This is the 9th ESS Speedweek and Jason Barney, Paulie Colagiovanni, Danny Varin, Steve Poirier and Michael Parent have been crowned champions in the past. Who will earn the title this year? Let’s look at the drivers who have committed to all the races and have a chance of winning the CNY Speedweek title.

Jason Barney – “Racin’ Jason” is the front runner for the speedweek championship. He won the speedweek title in 2014 and 2021 and has past wins at three of the tracks. Will he get his first Can-Am win and add another title?

Dylan Swiernik – Dylan has been fast with his new motor and car. He won at Genesee Speedway and was on his way to earning another win at Evans Mills before he pirouetted on his tail tank. Can he knock down more wins during speedweek and challenge for the title?

Matt Tanner – Matt currently sits 3rd in points and has eight top tens. He has been a Speedweek bridesmaid. Will this be the year that he shakes off the “never the bride”?

Shawn Donath – He is always fast at three of the four tracks on the schedule and has won in the past at Brewerton and Can-Am. Count on his team to be in contention.

Davie Franek – “No Panic” won the United Sprint Car Series (USCS) Winter Heat Series and already has feature wins with USCS and PST. Will he add an ESS win and the speedweek title to his resume?

Brett Wright – Brett has been on an upward trajectory. In the last four races, he has finished in the top ten. Will his momentum continue and result in top fives and possibly a win?

Jeff Cook – He has garnered five top tens this season. Can-Am, his hometown track, has been his nemesis. Can he put together four top finishes to be in the running?

Kelly Hebing – “Little Cobra” may have a different driving style than her father but she is always racy. This season, she has led laps and been on the podium. Will her car be in a speedweek victory lane?

Sammy Reakes – The “Honey Badger” earned his nickname by beating “Cobra” at Can-Am a few years ago. He loves bull rings and Brewerton is one of his favorites. Will he be the dark horse for the championship?

Dalton Rombaugh – This year, Dalton switched to sprint cars after racing Sportsman at Can-Am. He has adapted quickly to open-wheel cars. With his experience at Can-Am, will he earn his first win there?

Scott Holcomb – Expect Scott to be quietly consistent. Will his consistency pay off during speedweek?

Lacey Hanson – Lacey loves running the low groove. Will all four tracks’ surfaces be conducive to her driving style?

Tyler Cartier – Four nights of back to back racing can take a toll physically on the driver and team. Tyler has been working out in the off season. Will his youth and workout regime give him an advantage during speedweek?

Keith Granholm – Lately, Keith has started the features based on his dash finishes. Look for him to continue this and creep up in the dash series points.

Fans, what are your predictions? Come see “America’s Race Cars” and root on your favorite drivers. Excitement guaranteed!