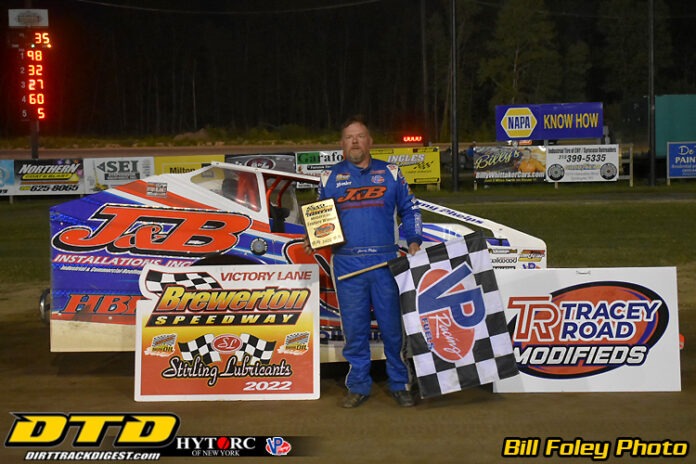 BREWERTON, NY – Jimmy Phelps started the 35-LapTracey Road DIRTcar Big Block Modified feature in the twelfth spot and had his car working no matter where he put it on the speedway on the way to the front.

Phelps would move into second on a lap eleven restart and then would have a close battle with the 358 Modified of Dylan Zacharias, finally taking the slim lead on lap twenty-one. Once out-front, Phelps would outrun Ron Davis III to the checkers.

Dylan Zacharias and Nick Krause would swap the lead back and forth in the early going of the Modified feature, while the racing behind them was two and three-wide.

With ten laps complete, the Small Blocks of Zacharias, Krause, and Max Hill occupied the top-three spots as the Big Blocks of Ron Davis III who started tenth and Jimmy Phelps from twelfth raced in the top-five.

A caution on lap eleven and restart saw Phelps and Davis drive into second and third, and then set their sights on Zacharias.

On lap fifteen Zacharias was still hammer down out-front opening a ten-car length advantage as Phelps, Davis, and Jackson Gill looked for a way to close in.

Zacharias and Phelps would come across the line almost dead even on lap twenty, with Phelps taking the lead one lap later.

With ten to go, Phelps would hold a few cars length advantage over Zacharias as Gill, Davis and Chris Hile raced for third through fifth.

A yellow on lap thirty-one would give the field one last shot to steal the win away from Phelps. There was no stopping Jimmy Phelps as he cruised under the checkers for his second win of the year and is in the thick of the points race with four points events left in the season. Ron Davis III, Dylan Zacharias, Jackson Gill, and Chris Hile finished second through fifth.

Austin Germinio would grab the lead at the drop of the green in the 20-lap Sportsman feature and by lap five would be in a two-car breakaway at the front by lap five with Buckey Hayes.

With ten laps showing on the scoring tower, Germinio opened a half a straightaway lead over Hayes with John Wilbur, Amy Holland, and Cody Manitta in the top-five.

With laps rapidly clicking off the scoring tower in the caution-free race, Germinio was still in total command with Hayes racing alone in second. Behind the top-two you could have thrown a blanket over Wilbur, Manitta, and Holland.

Tom Mackey would take the lead on lap two of the 20-Lap Mod Lite feature. The majority of the race he would hold off Joe Isabell who was on a two-race win streak to grab his second career Brewerton win. Joe Garafolo made a late race charge to finish second followed by Joe Isabell, Kyle Demo, and Mike Mullen to complete the top-five.

Any questions you might have and for marketing opportunities, contact Cory Reed at (315) 668-6906 or cory@brewertonspeedway.com. For all the latest news, go to www.brewertonspeedway.com powered by My Race Pass, and like the speedway social media pages.