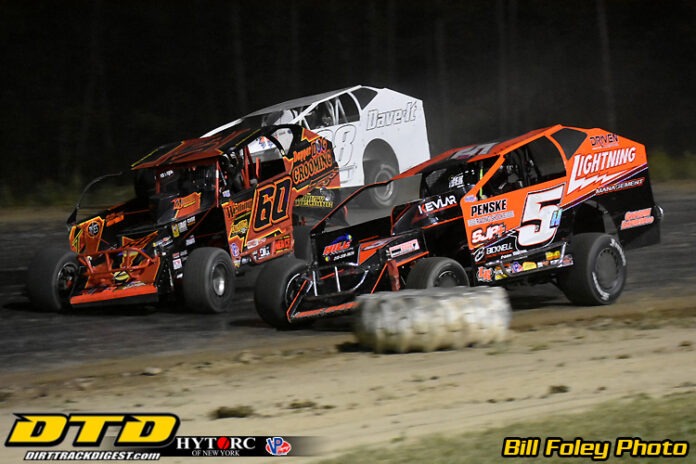 BREWERTON, NY – Chris Hile claimed victory after a long battle with Jackson Gill at Brewerton Speedway, with the pair going door-to-door for much of the latter half of the feature. With the win, Hile launched to the top of the points standings at Brewerton with two races remaining.

Ben Bushaw led the pack around the far top for the first stage of the 35-lap race, with Andrew Ferguson and Jeff Taylor hanging right off Bushaw’s rear bumper. The top trio remained together until a lap 13 restart, where Gill split the middle of Ferguson and Taylor to take second. Half a lap later, Gill tossed a slide job on Bushaw to grab the lead.

Hile was the first of the frontrunners to make a home on the extreme bottom, and it paid off quickly. Hile slid under a pack of cars to go from fifth to second on lap 14, then beginning his march on Gill. With Gill up top, Hile had the bottom to himself, and Hile reached Gill by lap 20.

When Hile put a nose out front, Gill quickly began searching for speed, moving to the middle and changing his line entirely. It worked, as Hile’s run stalled, and Gill hung at his door. The pair ran side-by-side for quite some time, but with five laps left, Hile was able to launch off the bottom of turn two well enough to secure the lead. Over the final laps, Hile stretched his legs in traffic and drove to the win over Gill, Tim Sears Jr., Tom Sears Jr., and Jimmy Phelps.

“That was awesome,” Hile said. “Racing with Jackson was a ton of fun, clean, that was as good as it gets. I just had to stay very patient on the bottom, I kept seeing his nose and seeing his nose, but eventually we got to traffic and were able to break free. It was definitely tough running down there on the far bottom. Turn one you need to slow down a ton to make sure you get off of two good, and three and four is a ton of momentum. It’s super technical, for sure.”

With two races left, Hile now leads the points by 12 marks over Larry Wight, and Tim Sears Jr. trails by 42. In the DIRTcar Weekly points system, race winners receive 60 points, with 20 awarded to 23rd position on back. While Sears has some ground to gain, Wight is easily within striking distance of Hile, needing to beat Hile by a handful of spots over the next two events.

Tony Finch II took the lead at the start of the 25-Lap Sportsman feature and would hold a ten-car length advantage by lap 10 as Alan Fink, Riley Rogala, Richard Murtaugh, and Ryan Dolbear race for second through fifth.

Finch would see his 1.2 second lead go away on a lap 13 caution. Fink would take advantage of the caution as he would drive into the lead on the restart.

Once out-front, Alan Fink would outrun Richard Murtaugh to the checkers for his third win of the season. Tony Finch II, Zach Sobotka, and Amy Holland finished third through fifth.

Just two laps into the 20-Lap Mod Lite feature, Zack Babcock took a hard series of flips down the front straight. All the driver safety equipment and the safety built into the car allowed Babcock to walk away.

Justin Williams and Joe Isaball would put on a tight battle for the lead until lap thirteen, when Isabell saw the opening he needed to drive under and by Williams. Once out-front, Isabell drove away from the field for his fifth win of the season. Justin Williams, point leader Mike Mullen, Tucker Halliday, and Tom Mackey completed the top five.

Any questions you might have and for marketing opportunities, please contact Cory Reed at (315) 668-6906 or cory@brewertonspeedway.com. For all the latest news go to www.brewertonspeedway.com powered by My Race Pass, and like the speedway social media pages.