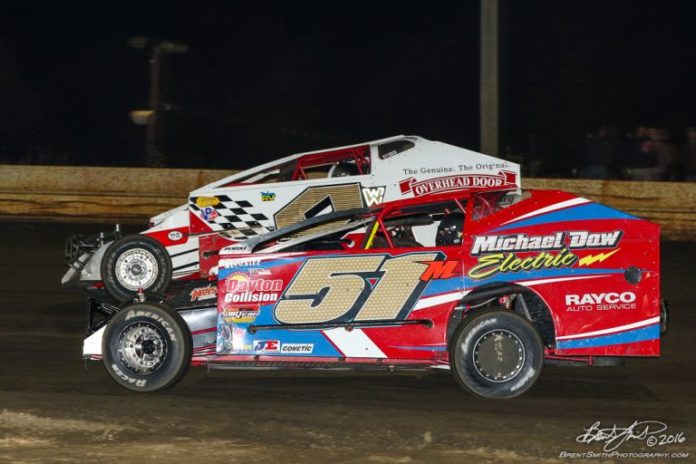 SWEDESBORO, NJ – Several marquee events have been penciled onto Bridgeport Speedway’s 2017 racing schedule. Fresh off an exciting ’16 campaign, speedway management has been hard at work putting together another dynamic schedule for next season. Along with action-packed racing on Saturday nights, there are plenty of ‘special’ shows that will appear throughout the course of 2017. Theme nights, special promotions, additional division information and much more will be announced in January at the annual Motorsports show. Highlighted below are some of the key dates during 2017.

Two practice dates will be held for the 5/8 mile (also in conjunction with the 1/4 mile). Those dates are Saturday, March 18 and Saturday April 2.

The 5th edition of the ’60over Special’ Poker Series race in honor of Doug Hoffman will kick off the ’17 season in grand style. This year’s version will offer an additional race as Bridgeport will start the season with two-day event. The 358 small blocks have been added as part of a Friday, March 24 program. Then on Saturday, March 25 the Big Blocks roar into action along with a full racing card.

The blockbuster ‘Pack the House Night II’ will see its return on Saturday, June 17. The FREE general admission night certainly packed the stands in 2016, as Bridgeport is looking to top that in ’17. The unique event will once again see action on both 1/4 and 5/8 mile racetracks.

The DIRT boys will be towing into town on Thursday, May 18 to take part in a 60-lap affair for the powerful Big Blocks. DIRT hasn’t visited the 5/8 mile in many, many years. If that’s not enough to get the heart pumping, this will also serve as the Final Friends of Mike event. The 12th annual ‘FOM’ will be sent off in dramatic fashion as ALL the top name drivers will be on hand to be heralded as the last winner of this popular race.

The Brett Deyo-led Short Track Super Series ‘South Region’ will return for the third straight year with the ‘South Jersey Shootout’ on Sunday, April 23. High car counts and a well-received fan base have led Bridgeport to add a second series race on Saturday, September 30. Deyo’s ‘Dirty Jersey’ tradition will continue in the Garden State at Bridgeport Speedway. Tentatively, this series race will take place on the all-new 3/8 mile track that has already taken on construction this past autumn.

The resurgence of the URC 360 Sprints has once again landed them three dates at Bridgeport. The club’s opener will take place on Sunday, April 9 as they 360s join the Big Blocks, and Crate/Sportsman. URC will make their second visit to the 5/8 on Tuesday, July 11 along with the Super Late Models, and 358 small block modifieds for the 3rd annual ‘Three For All’. The final appearance for the winged warriors will come at the 2nd Annual ‘Big Track Classic’ weekend on November 3 & 4.

The 2nd annual ‘King of the Big Blocks’ weekend will return on the fourth weekend in September (22 &23). The two-day program will be highlighting the 358 small blocks on Friday as the mighty Big Blocks will take center stage on Saturday. Once again this will be an event that needs to be circled on any race fan’s calendar.

Three of the fan-favorite Poker Series races have been inked onto the schedule for Sunday, May 28, Thursday, June 8 and Monday, July 3. The Big Blocks will race in 40-lap features paying $4,000 to win each. The Crate/Sportsman will join the Modifieds in all three shows while the Outlaw Stocks will be in competition during the May and July events.

‘Wild Card Weekend’ will conclude the 2017 campaign as it usually does each November. The two-day late-autumn show always leaves the fans wishing the season didn’t have to come to an end. The 358 small blocks will make their 4th appearance on Friday, November 10, while the Big Blocks finish the Poker Series on Saturday, November 11.

Stay abreast of all the news, excitement, and happenings for the 2017 season at the Bridgeport Speedway by following them on social media. You can visit www.bpspeedway.com, check them out on Facebook, Instagram, and Twitter.