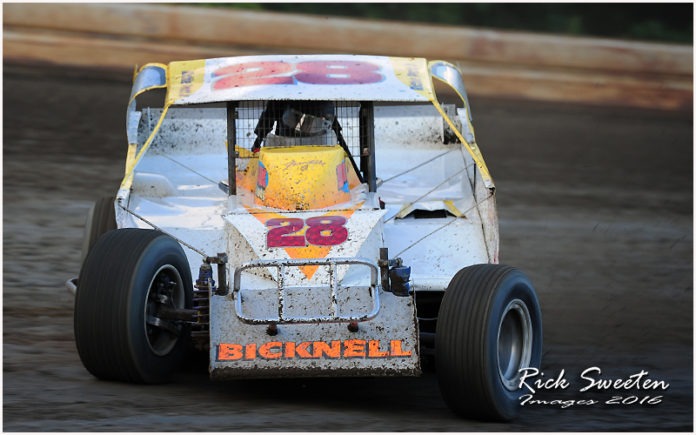 SWEDESBORO, NJ – When you think about Bridgeport Speedway and it’s fleet of talented drivers, one must always mention Richie Pratt Jr. Pratt has been racing Bridgeport for over 20 years now, and has had success in both the Big Block and Sportsman divisions. After a long stint with the Overhead Door Team, Richie was back on his own again in the Family No. 28 in 2016. The familiar red and yellow machines both big and small blocks were on hand for regular Saturday night action as well as special shows.

Pratt will once again steer those 28 cars in 2017 however, he’s looking for much better results this time around. Although Richie did finish 5th in the final point standings, it was certainly a sub-par year as far as the driver is concerned.

“We just lacked on equipment last year to be honest. We upgraded this year and I hope the results come with that. We bought two new “used” motors and we have a Bicknell that is going to be our Bridgeport car. We have the Troyer if and when we can hit the road,” Pratt summarized.

The 40 year-old Sewell, NJ driver had the entire grandstands on their feet during last year’s Wildcard Weekend Big Block 40 lapper. Pratt was about to grab a nice $4,000 pay day until getting passed right before the finish line. The silver lining in that defeat was that everyone saw that the second-generation driver still had everything it takes to get the job done. Some of the sponsors that will be seen on the ’17 car will be South Jersey Overhead Door, Johnny Leach and Delran Auto Body, B&F Towing, Drissel’s Hardware, Fred’s Trailer Repair, and Dennis Drain’s Property Maintenance. And the guys on the pit crew consist of Richie’s father Rich Sr, John Sine, Tom Drissel, Steve Wescott, and Rich Swangler. Pratt sits on 23 career victories in the Big Block division. He’d like nothing short of adding a few more in 2017.