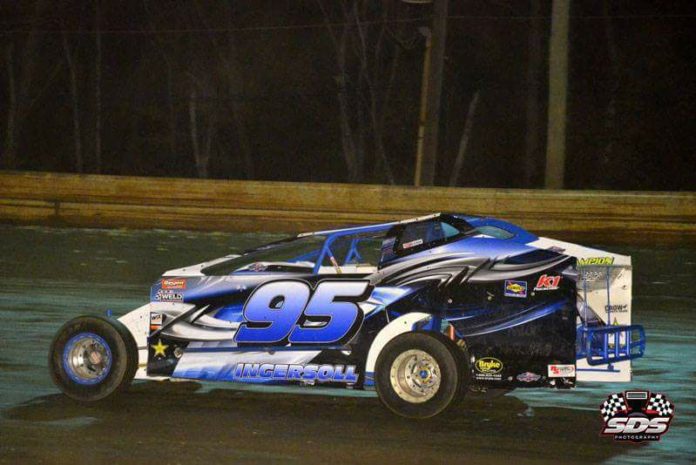 SWEDESBORO, NJ – For the 5th consecutive year D.A.’s Auto Body & Repair will be sponsoring the Crate/Sportsman division at the Bridgeport Speedway.

“The rookie division is important not only to the racers but, it’s important to the track as well,” explained Dave Adams owner of D.A.’s. “The more new blood we get to come into the sport, the better if it will be in the long run,” Adams added.

The top 3 point finishers will be honored at the year-end banquet for the Bridgeport Speedway drivers. Along with point fund money, the champion will receive a championship trophy and plaque and champion jackets courtesy of American Racer and Insinger Performance/Sunoco Fuels. The 11-race series will kick off on Friday night, March 24 as part of the 60over Special ‘Doug Hoffman Memorial’ Weekend. A champion will be crowned as the class graduates on Saturday, June 24 before moving up ‘officially’ into the Crate/Sportsman division.

Past champions include Ian Humphreys (’13), Matt Peck (’14), Steve Kemery (’15), and Chuck Sayres (’16). The first driver looking to join that group is Oliva Ingersoll. As of now, Olivia seems to be the only female entry in this year’s rookie field (Shannon Marshall placed third in last year’s rookie points). Ingersoll got her introduction to racing just three short years ago by helping fellow friend and Big Block racer Mike Franz. “Once I started coming to the race track, I just fell in love with everything and really wanted to race,” expressed Ingersoll. Oliva tried her hand at a couple of ‘Powder Puff’ races on the 1/4 mile and all that did was increase her desire even more to try it ‘for real’. So she went out and purchased an ’06 Teo car that will carry No. 95, along with a 602 crate engine. Ingersoll was able to get two late practice sessions in last season in the final two events at Bridgeport. The 21 year-old Gibbstown, NJ resident works on the car all by herself. “I don’t really have a crew other than Mike’s crew to help at the track, and if I have a question, I usually ask Mike for advice.” Although the odds may look stacked against this young lady, you can never count out hard work and determination.

The second driver to officially declare themselves eligible for the 2017 D.A.’s rookie class is Keith McKinley. Although a rookie driver, Keith is no stranger to Bridgeport as he has been racing in the 4-cylinder class the past few seasons on the Spirit Auto Center 1/4 mile on Friday nights. “I just wanted to move up really. The 4-cylinders were fun but I was ready for a change,” offered McKinley. The 40 year-old Deptford, NJ driver purchased an ’08 Dirt Wheels chassis this off-season so he could participate in the ’17 rookie series. McKinley is currently working on securing some sponsorship for his No. 9 Sportsman to help aid him in his rookie quest. His girlfriend Jennifer Hardy and his uncle Terry are his pit crew for his rookie campaign this season.


The third driver to register into the D.A.’s Auto Body Rookie Series for 2017 is young Tommy Errico Jr.

If you recognize the Errico name, you’re not imagining things. Tom Errico Sr raced in the late 80s and early 90s at both Bridgeport and East Windsor Speedways. The elder Errico did record a win at Sportsman win at Bridgeport and a couple at Windsor 25 plus years ago. Now, it’s time for his son to carry the
‘racing’ torch in the family.

The second-generation driver was able to shake down the car a couple of times late last season while Sr. also jumped behind the wheel to help with the set up. Tommy Jr will be piloting an ’04 Troyer powered by a 602 crate motor. The 19 year-old Feasterville, Pa driver will carry the ‘X-Rated’ number on the sides of his Crate/Sportsman hot rod. Some of the sponsors that make it all happen for the Errico Team are K&M Trucking, R. Miller & Sons Automotive, and Sunglass Central. If you were to take a visit into the pit area you’d be likely to find Billy Culver, Colin Barber, and of course Tom Sr. turning some wrenches each and every weekend. You can count on Errico Jr to try everything he can to keep up the family tradition by making it into Bridgeport Speedway’s victory lane at some point this season.