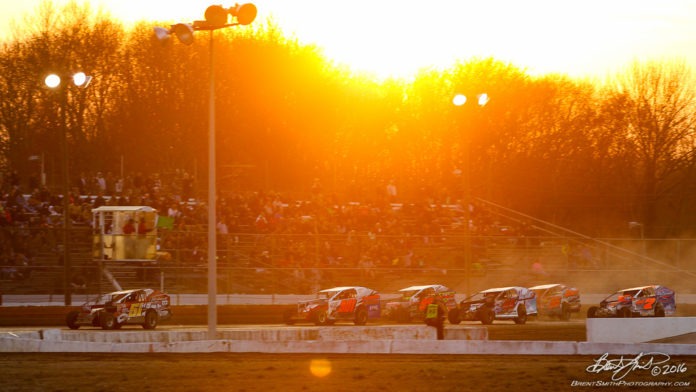 SWEDESBORO, NJ – In just a few short weeks, the Bridgeport Speedway will honor one of its own when the Fifth Annual 60 Over Special | Doug Hoffman Memorial Weekend opens the 2017 season on the 5/8th mile speedway.

Many credit Doug Hoffman for the resurgence of the Bridgeport Speedway.

The four time track champion took over the reins for the 2012 speedway. After meeting with track owner, Brian Ramey, it was clear that Doug Hoffman was the man for the task at hand.
The Big Block Modifieds had been removed from the Saturday night schedule as a last ditch effort on the part of Jay James who had tried just about everything to be successful at the Logan Township race track. James decided to leave the speedway at the end of the 2011 season, leaving the future of the Bridgeport Speedway as a big question mark as the New Year approached.

Ramey met with several interested parties but it was clear that Hoffman was the right man for the job. “I didn’t know Doug well,” Ramey explained. “Doug approached us to discuss the possibility of him taking the reins for the 2012 season. We had several people pursuing the opportunity but none of them had the insight that Doug had. There was no doubt that he (Hoffman) was the best fit since his heart was in Big Blocks and that is what Bridgeport was designed and built for.”

Hoffman first met with fans and competitors at the Motorsports Show in Oaks, PA in January. It was a very optimistic and enthusiastic Hoffman that met with the press on Friday night of Motorsports. He outlined some of his plans for the coming season – the return of the Big Block Modifieds, the introduction of the Poker Series, his plans to make the speedway racier as well as several promotions that were directed for the benefit of the fans at the front gate.


“When people say that Bridgeport is too fast, what they really mean is that there is too much traction,” Hoffman explained. “We have to produce good racing. We need a slick surface from top to bottom. It can’t take down rubber. It can’t be a one lane track.”

Hoffman talked about how drivers like Tobias, Brightbill, Horton, Pauch and himself as well, traveled to other tracks and won big races, making people sit up and take notice of the drivers who regularly competed at the Bridgeport Speedway.

“It needs to be cool as hell to win at Bridgeport,” Hoffman told the crowd. He compared it to his induction into the DIRT Hall of Fame in 2011. “That was freakin’ neat – that’s the feeling we need to create at Bridgeport.”

Afraid that he wasn’t able to meet with everyone during the trade show, Hoffman set up all day meetings the following Saturday at the local Holiday Inn.

As the end of the 2012 season approached, Hoffman could take great pride in what he had accomplished. Nearly fifty Big Blocks were on hand for the season opener that year – a Race of Champions on Dirt event. The Poker Series was a huge success when introduced to the fans at Bridgeport. Hoffman combined efforts with 410 Sprint Car owner, Mike Heffner, to bring the 410s to the Bridgeport Speedway. He brought the racers to the fans by having the starting line-up stage behind the grandstands, giving the fans a very up close and personal look at the competition. And he continued a Bridgeport tradition of bringing the top five finishers behind the grandstand after each feature event – a tradition that Hoffman, himself was not a fan of when he competed at Bridgeport.

“I got a lot of heat for that and I deserved it,” Hoffman said of his lack of cooperation as a driver. “Everybody makes mistakes and I made one with the fans at Bridgeport when I raced there.” As a promoter, Hoffman saw the other side of the story.

When Hoffman criticized the track preparation during the season, he was told to do it himself – so he did. If a job needed to be done – cut the grass, pick up trash, talk to a competitor – whatever it was, Hoffman did whatever was needed.

Looking back on the 2012 season, Hoffman said, “The track has raced another year and it didn’t fold on our watch.” “We’ve had good racing. I think we put to bed the rumor that you can’t have good racing on a big track.” Four drivers captured their career first wins that season in Big Block Modified competition – Mike Barone, Eric Kormann, Jesse Hill (with a Small Block) and Stan Frankenfield, Jr.

With ninety-two Bridgeport feature wins and four track championships, Doug Hoffman knew what needed to be done. While he only had one season as the track’s promoter, there is little doubt that he laid the foundation for what the Ramey family, Keith Hoffman, Dave Adams and Danny Serrano have continued for the last four seasons.

The Bridgeport Speedway will open the gates on the 2017 season with the running of the fifth annual 60 Over Special | Doug Hoffman Memorial Weekend on March 24th and 25th. While it is the fifth year of the race honoring the former track champion and promoter, this will be the first time that the event will be run as a two day event.

Friday night action will see the return of the 358 Small Block Modifieds for a twenty-five lap, $2500 to win main event. It will be the first race of the season for the DA’s Auto Body & Repair Rookies on the 5/8th mile track. All divisions will have the opportunity to participate in the open practice sessions on Friday night so that they can prepare for Saturday’s racing action. Pit gates will open at 3pm with grandstand access at 6pm. Racing will get underway at 7:30pm.

On Saturday night, the Spirit Auto Center Big Block Modifieds will compete in qualifying events for a forty-four lap feature event with $4,400 going to the winner. The Stewart Stainless Crate/Sportsman and PennCo Tech Outlaw Stocks will run qualifying events and features as well. Saturday’s race card will be the first hand of the 811 Dig Safely/Colonial Pipeline 2017 Poker Series. Pits will open at noon, grandstands at 2pm and racing will get underway at 4pm. (There is a rain date set for Sunday, March 26th should it be needed.)
The Bridgeport Speedway is committed to maintaining a safe, fun, family atmosphere, creating life-lasting memories of excitement.