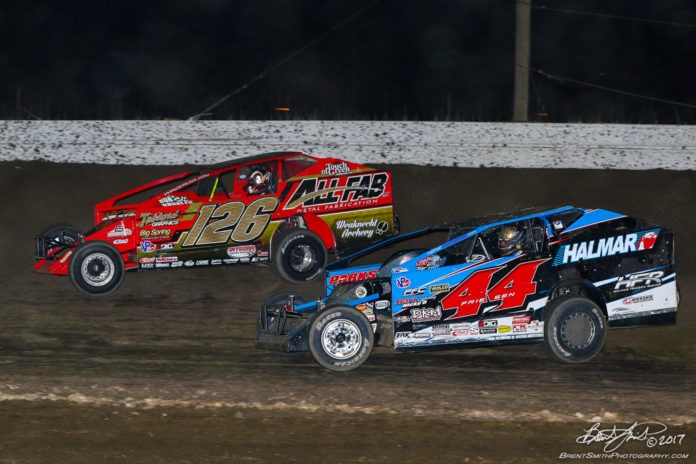 SWEDESBORO, NJ – The Bridgeport Speedway presented the fifth annual 60 Over Special/Doug Hoffman Memorial and the first hand of the 811 Dig Safely 2017 Poker Series that saw Stewart Friesen, Brian Papiez and Jon Meyer pick up an Ace for their Poker hands in addition to their wins in their respected divisions.

Rain fell after the heat races and Penn Co Tech Outlaw Stock feature had been run. After several showers passed through the area, the track crew – led by Keith Hoffman – went to work and restored the racing surface so that the event could be completed.
“I’ve always wanted to win one of these races (Hoffman Memorials)”, Friesen stated following his win in the Spirit Auto Center Big Block fofty-four lap main event. “Doug was a friend of my family’s – my uncle and grandfather so this means a lot,” Friesen continued. Friesen led only the final two laps but it was the all that was needed to capture the prestigious win.

Fourteen drivers participated in the revenge redraw to determine the race’s starting line-up – the top four qualifiers in each of the three qualifying heats and Friesen and Jamie Mills who set fast times in their timed hot lap sessions during Friday night’s event. It was Ryan Watt who drew the pole but he then passed his draw on to Sam Martz. Friesen drew the third spot but passed that spot onto Jeff Strunk. Watt started tenth and Friesen started fourteenth.

Martz took command at the wave of Kenny Golden Jr.’s green flag with Strunk and outside polesitter, Billy Pauch Sr. trailing. Jamie Mills, Duane Howard and Ryan Watt made their way past by Pauch on lap three. Pauch slowed and headed to the pits on the next lap.

Strunk was closing on the leader before the first caution waved for Mills who came to a stop in turn four with mechanical woes. Strunk pulled ahead of Martz on the restart to become the new race leader on lap fourteen. At half way, Strunk led Friesen, Howard, Martz and Billy Pauch, Jr.


Strunk was able to pull away from the field and appeared to be on his way to his first ever Big Block Modified win at the Bridgeport Speedway. With less than ten laps to go, Strunk visibly slowed, allowing Friesen to close in. Strunk’s All Fab sponsored, Hyneman owned No. 126 had a different sound to it as Friesen pressured Strunk for the lead. Friesen was able to run the inside into the corners and pull along side of Strunk who was then able to power off the outside to maintain his advantage.

Strunk and Friesen raced side by side to complete lap forty-two with Strunk pulling ahead off turn two before the final caution flag waved. Strunk went to the restart as the leader but Friesen had the advantage when the pair exited off of turn two. Friesen led the way to the checkered as Strunk was able to hold off Howard to finish second. Pauch Jr. finished fourth with Neal Williams rounding out the top five.

Brian Papiez started eighth in the Stewart Stainless Crate/Sportsman feature event and raced by race leader, Chris Jenkins to take the half way sign at the front of the field. Papiez then drove away from the competition to capture his second Bridgeport feature win of his young career. “I plan to run the Poker Series so it was great to come away with an Ace right away,” the race winner stated. Jordan Henn passed Jenkins for second in the closing laps. Jenkins picked up his best ever finish in third with Jeremy Harrington and Frank Dorry completing the top five at the line.

Jon Meyer closed out the 2016 season with a third and then second place finish in PennCo Tech Outlaw Stock competition for his best finishes to date. He opened the new season with a win after Jeramy Doerr, who took the checkered flag, failed to pass post race tech. The win gave Meyer an Ace to start out the 811 Dig Safely Poker Series. Tom Wills, Jr. finished second followed by Brian Ludwig, Vern McLaughlin and Jeff Dirkes.

It was a full day of fast paced racing that paid tribute to past champion and promoter, Doug Hoffman.

The Bridgeport Speedway will run a practice session on Saturday on both the Spirit Auto Center quarter mile and 5/8th mile tracks. Practice is open to all divisions and will get underway at noon.