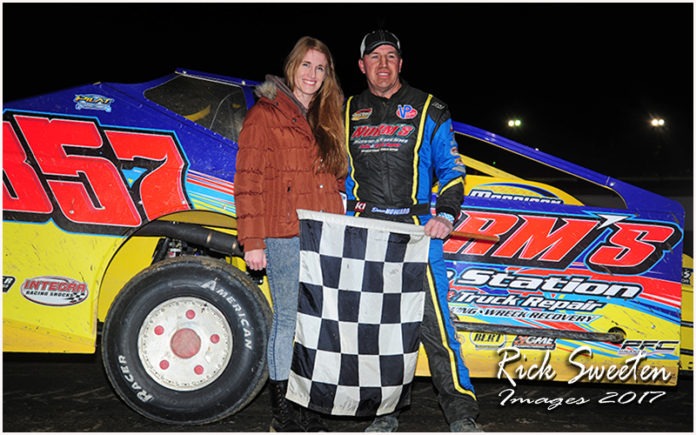 SWEDESBORO, NJ – Four drivers broke into the win column for the first time in the young 2017 racing season with wins on Sunday in Bridgeport Speedway racing action.

Oley, PA driver, Duane Howard picked up the first win of the season for his Norm Hansell No. 357 team in the Spirit Auto Center Big Block Modified twenty-five lap feature event. Nine time United Racing Club Champion (URC), Curt Michael was the winner in the BRB Contractor sponsored opener for the oldest traveling sprint car series in the United States. Former Crate/Sportsman Champion, Travis Hill, climbed behind the wheel of Brett Cogdill’s No. 98 and raced to the win in the Stewart Stainless Crate/Sportsman feature event. Jim Cheesman was the winner in the second DA’s Auto Body & Repair Rookie event of the 2017 season.

Howard drew the pole for the start of the Big Block Modified feature and then proceeded to lead from the green flag to the checkered for his first win of the 2017 season. Howard held off Richie Pratt, Jr. on several restarts to capture his forty-sixth career win on Bridgeport’s 5/8 mile track. Pratt was sidelined with mechanical issues in the closing laps, relinquishing his runner-up performance to 2015 Bridgeport Champion, Jamie Mills in his Blue Hen Racing No. 30. Mike Barone finished third in his first start of the 2017 season, racing his family owned No 267. Sam Martz rallied to capture fourth in his Izzi’s Trucking No. 3 ahead of Jeff Strunk in the Hyneman All Fab No. 126. It was a red letter day for Bicknell Racing Chassis who captured the first four spots ahead of Strunk in a Teo chassis.

School was in session as Curt Michael drove his Bill Gallagher owned No. 5G into the lead in the closing laps, grabbing the lead and the win from reigning URC Champion, Davie Franek. It was Michael’s tenth Bridgeport URC victory – a track rich in the URC history. Franek trailed Michael to the checkered with Robbie Stillwaggon taking a third place finish over Derek Locke and Davey Sammons.

The Hill brothers, Jesse and Travis, have each had repeated victories in the Cogdill No. 98. When Travis Hill’s racing schedule opened up for this weekend, the No. 98 was made available for Hill. Hill took the lead on lap six after race leader, Roger Manning got out of shape, tangling with challenger, Brian Papiez. Hill raced away from the field, taking the checkered ahead of Jeremy Harrington. Harrington was later disqualified following a post race tech inspection. 2015 Rookie Champion, Stephen Kemery finished second followed by Brandon Grosso, Kevin Belmont and Davey Wenger.


After competing for the win in the first DA’s Auto Body & Repair rookie event of the season, Jim Cheesman made a strong statement, leading seven of the eight laps in the second Rookie feature of the year. Jim Gallagher, Jr. crossed the finish line in second but was penalized two positions for his involvement in an on track incident. Kevin Britt, with one Rookie feature win to his credit, finished second with second generation driver, Brett Belmont taking third. Gallagher finished fourth with early race leader, Chris Sammons finishing fifth.

Racing action returns to the Bridgeport Speedway this Saturday for the start of the 2017 point season. Racing gets underway at 6pm for the Big Block Modifieds, Crate/Sportsman, Outlaw Stocks and Rookies.