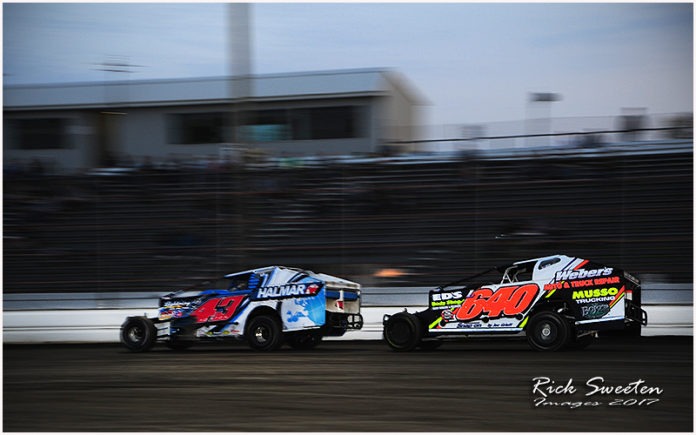 SWEDESBORO, NJ – The Bridgeport Speedway will host the third running of the South Jersey Shootout this Sunday. This event will be the second race of the 2017 season of the South region’s Bob Hilbert Sportswear Short Track Super Series (STSS) fueled by Velocita.

By virtue of his win in the season opener, “The Sensational One”, Jimmy Horton is the series point leader as the series returns to a track that Horton called his home for many years. Horton has recorded 128 victories on Bridgeport’s 5/8 mile speedway to lead all drivers on Bridgeport’s All Time Feature Winner List in addition to his multiple track titles, small block wins and even sprint car victories. Horton and his Halmar No. 43 team will be in the star-studded field when the STSS moves to the Logan township racing facility this weekend.

The first South Jersey Shootout was won by Rick Laubach in 2015. Laubach led from the green flag to the checkered to capture the victory in the Gary & Lori Hermann owned No. 7. After falling through the field in the early laps, Ryan Watt considered pulling off the track with his ill handling car but by the time the field received the crossed flags signifying half way, Watt had used the outside line to propel his Ron Roberts Racing No. 14w into the top five. Laubach would later credit his crew with this win because of their signals from the pits, indicating that a challenge was forthcoming and that he needed to change his line. Laubach moved up the track, taking away Watt and Craig VonDohren’s line of choice and went on to collect the win.

David VanHorn raced his family owned No. 71 to a second place finish ahead of VonDohren, Watt and Jack Swain.

Last year, it was Wade Hendrickson who drove the Craig and Leslie Pondish owned No. 6 to victory in the South Jersey Shootout in what was the team’s first race of the season. The small block Ford motor had just been received from Medford Speed a few days earlier and Hendrickson drove ahead of his good friend, Billy Pauch for the win. Hendrickson’s win was a green to checkered flag effort with challenges coming from first Horton, then David Hunt, Pauch and Stewart Friesen. When the checkered flag waved, Hendrickson led the way to the $5,000 payday followed by Pauch, Friesen, Hunt and Ryan Godown in the Hewlett No. 901.


Now we move on to year three and who will the winner be? Both past winners came from a pole position start. No driver has had a repeat finish in the top five. Friesen already has a Bridgeport victory this season with a win the 60 Over/Doug Hoffman Memorial event on opening day. Duane Howard gave car owner, Norm Hansell his first win of the season just two weeks ago. Laubach picked up a win from the pole just this past week, giving Gary and Lori Hermann their first win of the 2017 season. Bridgeport Spirit Auto Center Big Block regulars, reigning champion, Ryan Watt, 2015 Champion, Jamie Mills, Richie Pratt, Jr., Sam Martz, Dominick Buffalino, Brett Kressley, Neal Williams and a host of others will be defending their bragging rights against the invaders like Friesen, Howard, Jeff Strunk, Craig VonDohen, Ryan Godown and many more.

Brett Kressley was the Stewart Stainless Crate/Sportsman winner in the first South Jersey Shootout, picking up his third win of the weekend. Now he competes with the Big Block Modifieds where he captured his first career win last season. Brandon Grosso was the winner in 2016. Matt Papiez, Travis Hill and Matt Stangle each have a win so far this season and will be on hand against the invaders in the third running of the South Jersey Shootout.

Jeramy Doerr was the PennCo Tech Outlaw Stock winner in 2015 with TJ Henry earning the win last season. Jon Meyer and Tom Wills, Jr. each have a win this season and will be amongst the contenders in this year’s event along with Brian Ludwig, Ron Frees, Terry Griffen and Jeff Dirkes.