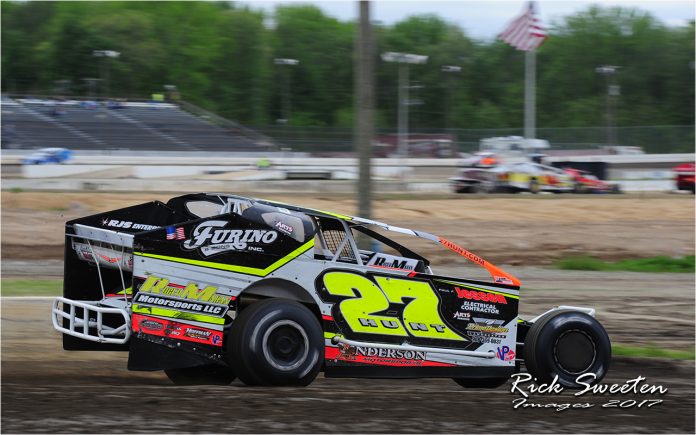 SWEDESBORO, NJ – For the second week in a row, David Hunt led the Spirit Auto Center Big Block Modifieds for twenty-five laps to capture the win – this time in Saturday night Bridgeport action.

Jeremy Harrington picked up his first win of the season in Stewart Stainless Crate/Sportsman action while Jeramy Doerr made it to the checkered flag for his first win in the PennCo Tech Outlaw Stocks. Jimmy Gallagher, Jr. was the first driver to repeat with a win in the DA’s Auto Body & Repair Rookie division.

Billy Pauch debuted his Tribute to Roy Pauch No. 15. The Pauch car is a throwback, Kenny Weld inspired car, paying homage to the patriarch of the Pauch racing family.

Hunt and Jack Swain, the racing school principal, led the field to the green, handicapped for front row starts in just the second point race of the season. Hunt took off at the wave of the green with Pauch hot in his tracks. Pauch was soon joined by Richie Pratt, Jr. who took over third and set his sights on Pauch’s No. 15. Hunt led Pauch, Pratt, Sam Martz and Ron Roberts through eleven laps before the caution waved for the first time, just after Pratt challenged Pauch for the runner-up spot. Wade Hendrickson had the C&S Equipment No. 6 on the move on the restart as he moved up to fourth with Ryan Watt following in fifth when the caution waved again for the slowing car of Roberts.

Hunt drove away from the field, leaving Pratt to work on Pauch and Watt to chase Hendrickson. That’s the way they would run to the checkered with Hunt out in front by nearly a straightaway. Pauch finished second with the No. 15 in its maiden voyage followed by a hard charging Pratt. Hendrickson and Watt rounded out the top five with Watt racing from his thirteenth place start.


“This car was really a handful during the heat race,” Hunt recounted. Hunt, who races one of the few remaining Troyer chassis cars on Bridgeport’s 5/8th mile track, continued. “It pushed like a dump truck,” even though he picked up the win in the first heat race. Hunt and his team have just kept working, week after week, after a rather dismal start to the season. “We really struggled those first few weeks,” Hunt explained. “We just kept working on it. This is the same engine we started the season with – we’ve just got the car working better now.”

Milford, DE driver, Jeremy Harrington took the lead from Brad Roberts and raced to his first win of the 2017 season in the Stewart Stainless Crate Sportsman feature. Harrington, with his crate engine powered No. 30, had built up a sizeable lead by the time two time feature winner, Brian Papiez arrived on the scene. Papiez finished a solid second over Eric Kormann, Matt Peck had his best outing of the season to finish fourth with Matt Stangle, another two time feature winner, rounding out the top five.

After coming close on so many other occasions, Jeramy Doerr finally sealed the deal with a win in the PennCo Tech Outlaw Stock main event. Doerr set a new one lap record for this division during hot laps. Jim Avery finished second in his first start of the season followed by Mike Creamer, Jeff Dirkes and Tom Wills, Jr.

Jim Gallagher, Jr. became the first repeat winner in the DA’s Auto Body & Repair Rookie Division, taking the lead from Jeff Stuart on the second lap of the feature event. Stuart led the first two circuits and went on to finish second, his best effort so far. Matt Luzi finished third for his best finish to date, followed by Brett Belmont and Kevin Britt.