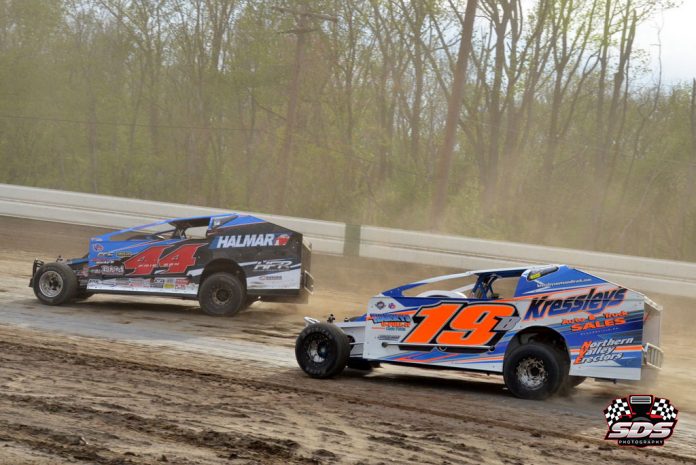 SWEDESBORO, NJ – The twelve year run of the Friends of Mike (FoM) event will come to a close on Tuesday, May 16 at the Bridgeport Speedway when it is run in conjunction with the Super DIRTcar Series event.

Friends of Mike all started back in 2006 when Danny Serrano, a racing fan, and several of his friends, set out to support Mike Rogie, an avid racing fan who was battling cancer. They came up with this event to give back to the drivers who put on the show for their enjoyment, week after week, and at the same time, honor their friend Mike. Serrano had not yet made the move into track management when he began this venture. “So many people wanted to be a part of it,” Serrano stated. “It was like a whirlwind.” No one would know then that this event would become a tradition that would extend through twelve racing seasons.

Sadly, Mike Rogie was never able to attend, his untimely passing came on the day of the inaugural FoM event. Brian Godown picked up the win in the first ever Friends of Mike.

Keith Hoffman put Pat Michael’s No. 51M into Victory Lane in the second FoM race a year later. “That race really turned our season around,” Hoffman offered. “We switched cars for that race and won.” Hoffman would be the first driver to repeat in FoM history when he won one of the four twenty lap events in 2008. Rick Laubach, Tim Tanner and Tad Cox were also twenty lap winners that year.

Billy Pauch picked up the win in 2009 and then Willie Osmun a year later. Another format change and it was Tim McCreadie who made a rare appearance for the win in 2011. McCreadie headed to a Late Model race the next day but not before collecting the checkered in the FoM event.


Danny Johnson was the 2012 race winner in the last event to be held at the New Egypt Speedway.

In 2013, Jimmy Blewett made history as the winner of the first FoM event at the Bridgeport Speedway as he earned his first ever Big Block Modified victory as he raced Billy Pauch for the win. In 2014, Stewart Friesen picked up his first FoM win which he promptly backed up with a second win the next year. In 2015, Serrano honored Sam Martz who was the only driver to compete in all ten FoM races. One year later, it was Martz who collected the victory as he raced to the win over Laubach, Dominick Buffalino and Ryan Watt.

Over the years, the format has changed as has the location, but the driver and fan support has never wavered. One year, Serrano engineered a horseshoe tournament among the drivers before the race. The fans and the drivers loved it! And every year, this race in run in conjunction with a huge Chinese Auction and this year is no exception! Tina Potts has been working hard with Serrano to make this year’s event the biggest one yet! Race car doors and roofs, driver t-shirts and all sorts of racing memorabilia have been collected and will be won by a lucky race fan on race night. Contributions for the Chinese Auction can be made by notifying Tina or Danny through Facebook.

Past FoM winners, Laubach, Pauch, Johnson, Friesen and Martz will be in the field, competing for a spot in the starting line-up of the final Friends of Mike. The DIRTcar series regulars with names like Hearn, Sheppard, Fuller, Decker, Wight and Ward, Britten, Mahaney, Flach, Phelps, McLaughlin and Scagliotta will be at Bridgeport for the second race of the Super DIRTcar series. They will have to meet the challenges presented by Bridgeport regulars led by reigning champion, Ryan Watt, past champions, Wade Hendrickson & Rick Laubach, back-to-back feature winner, David Hunt, Neal Williams, Richie Pratt, Jr., Dominick Buffalino and a host of others. Add in the invaders from the Tri-state area – Duane Howard who has already collected a Bridgeport victory with his Norm Hansell owned ride, Jeff Strunk who has been very competitive on the 5/8th mile track this season, Ryan Godown who recently picked up a second place finish with the Atlas Trucking No. 66 and then there’s the “Sensational One”, Jimmy Horton who has collected more wins than any other driver in the history of the Bridgeport Speedway.

This will be a night that every race fan dreams of – with all of the top names in Modifieds right here at the Bridgeport Speedway for the first Super DIRTcar Series event since 2005!

Racing gets underway at 7:15. Come early and enjoy! There will be musical entertainment before the races get underway. Bridgeport offers a wide selection of appetizing offerings at their concession stands. Pick up a new t-shirt to add to your collection. The Bridgeport Bullet – the official program of the Bridgeport speedway – will be a great keepsake for this event. Take a ride on the Bandit Bus and get a look at the behind the scenes action in the pits.