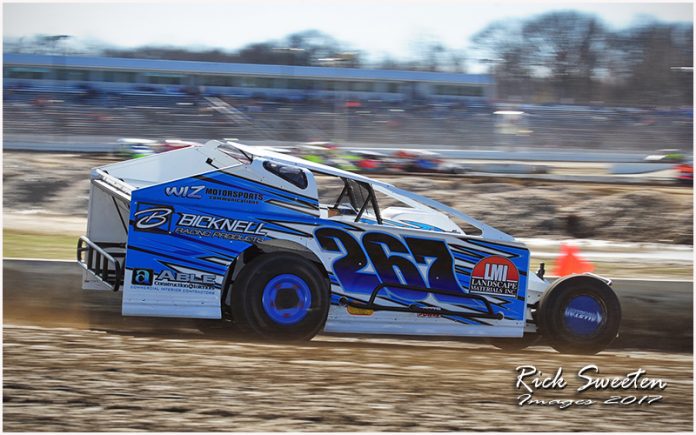 SWEDESBORO, NJ – For the first time since April of 2012, Mike Barone of Hillsborough, NJ raced to victory in the Spirit Auto Center Big Block Modified feature event at the Bridgeport Speedway as Eastern Autoparts Warehouse sponsored Bike Night at the Logan Township track.

Barone held off the repeated challenges of reigning Bridgeport Champion, Ryan Watt to capture the win in his Bicknell chassis, Lombardo powered No. 267. While Barone’s father, Don watched nervously from the pits, Barone hit his marks and drove to his second Bridgeport Speedway career victory.

Polesitter, Bob Sarkisian led the field to the green and led the way for the first three laps before mechanical issues saw Sarkisian’s night come to an end between turns three and four on lap four. Barone was the new race leader as Jesse Hill had his No. 99H racing in second. Watt raced from his tenth place start to take over second following a lap eleven restart.
Rick Laubach raced into third as Watt tried the inside line to challenge the leader but Barone rolled the outside line to perfection to maintain his lead.

Watt closed in during the final laps but Barone was flawless in his race to the checkered. Laubach followed Barone and Watt to the finish line for third with Hill and Neal Williams rounding out the top five.


Papiez raced from his starting spot in the seventh row to take the lead from Jim Gallagher, Sr. on lap eight. A late race caution tightened up the field and put a hard charging Roger Manning on Papiez back bumper but Papiez was not to be denied his third Bridgeport win of the season. Manning had his best outing to date to finish second with Matt Stangle moving into third before the checkered flag. Eric Kormann finished fourth to extend his streak of top five finishes. David Crossman rounded out the top five after a strong twenty lap effort.

Tom Wills, Jr. took the lead on lap five of the PennCo Tech Outlaw Stock feature and then had to hold off the challenges of Jeff Dirkes and Jeramy Doerr to capture his second win of the season. Dirkes was sidelined with mechanical woes in the closing laps as Doerr chased Wills to the finish line. Brian Ludwig rebounded from an early race incident to finish third over Ken Watson, Jr. and Jimmy Avery.

Jim Gallagher, Jr. took the lead from Brett Belmont on lap three and then drove away from the field to capture his third DA’s Auto Body & Repair Rookie feature of the season. Gallagher is the only driver to win more than one Rookie feature to date. Belmont had his best finish to take second over Matt Luzi. Jim Cheesman and Olivia Ingersoll rounded out the top five at the checkered.

Racing action returns to the Bridgeport Speedway for a special Thursday night event with the Colonial Pipeline 811 Call Before You Dig 2017 Poker Series. The Big Block Modifieds, Crate/Sportsman and Outlaw Stocks will compete in the Thursday night action with racing getting underway at 7:15pm.