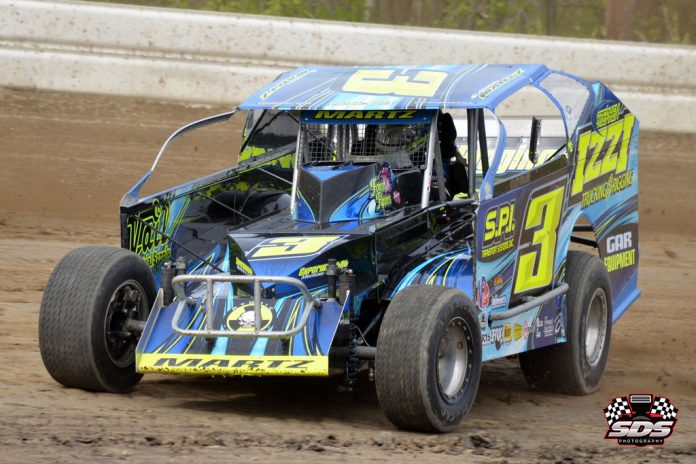 SWEDESBORO, NJ – Sam Martz, Roger Manning and TJ Henry each earned their first feature wins of the 2017 season in Saturday night action at the Bridgeport Speedway. Tommy Ericco, Jr. picked up his second win of the season in the DA’s Auto Body & Repair Rookie Division but it was Jim Gallagher, Jr. who was crowned as the 2017 Bridgeport Speedway Rookie Champion.

The Spirit Auto Center Big Block Modifieds were led to the start of their twenty-five lap feature event by a pair of fourteens – the Z14 of Ron Roberts was on the pole with the 14s of Dave Shirk starting on the outside.
Roberts took the lead on the start as Martz moved into second on lap one. Martz ran to the inside of Roberts as the leaders raced through turn two on the second circuit. After a side by side battle that ran the length of the backstretch, Martz emerged with the lead in turn three.

Martz raced away from the competition but never knew who or where his competition might be. “I ran wide open all of the time,” Martz explained after picking up the win. “I didn’t really move around a lot. The bottom was pretty good so I stayed there.” Martz led the way in a caution free event, leading all but the first lap.

After a side by side battle with Richie Pratt, Jr., it was Dominick Buffalino who finished second with Pratt in third. “I love racing with Richie (Pratt),” Buffalino exclaimed. “We’ve raced together since the East Windsor days and I don’t think we’ve ever touched!” Rick Laubach was looking to make it a three way battle for second but time ran out on the former track champion. Laubach finished fourth with Jesse Hill completing the top five at the finish line.

Clyde Cox had his best outing of the 2017 season as he led the Stewart Stainless Crate/Sportsman feature for the first twelve laps. A lap thirteen restart closed up the field. It was wild when the green flag waved but Roger Manning came away with the lead when the lap was scored. Five time feature winner, Matt Stangle raced into second but was not able to challenge Manning for the lead.


It was just about a year ago that Manning raced for the first time at the Bridgeport Speedway. Five weeks later Manning picked up his first win. Win number two came on Saturday night.

Stangle finished second with Jeremy Harrington finishing third. Matt Papiez moved into fourth on the final lap with Cox earning his best finish of the season in fifth.

TJ Henry drove an impressive race to pick up the win in the Drive for Dylan 50 – a special 50 lap event for the PennCo Tech Outlaw Stocks. This race pays tribute to Dylan Doerr, the son of Jeremy Doerr and Shanan Lea, whose life ended tragically at the age of one and a half. His family again organized this event in his memory.

For the second time this season, Tommy Ericco, Jr. raced to the win in the DA’s Auto Body & Repair Rookie feature event. This time it was a ten lap event that saw Errico race by leader Matt Luzi at the race’s half way point. Rookie Champion, Jim Gallagher, Jr. raced home in second followed by Brett Belmont, Jim Cheesman and Scott Kohler.

The Bridgeport Speedway switches to Monday night, July 3rd for its next race – Hand #4 of the Colonial Pipeline Call Before You Dig Poker Series for the Big Block Modifieds, Crate/Sportsman and Outlaw Stocks. Racing gets underway at …\. The Big Block Modifieds will also compete in a second feature event – the rained out feature from Hand #2. It’s the night before a holiday – come out and take in the action!