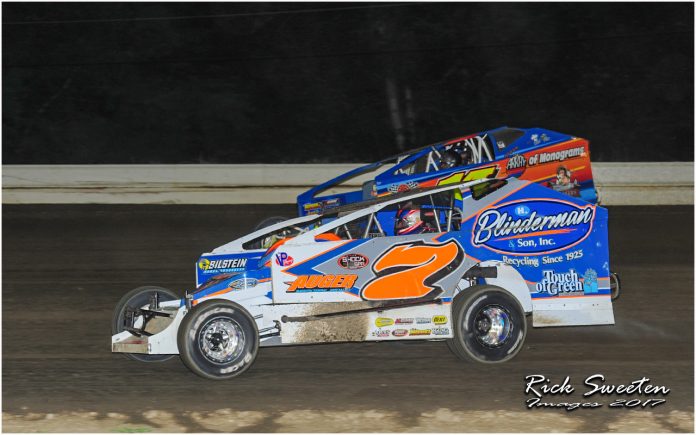 SWEDESBORO, NJ – Rick Laubach and Ryan Watt each picked up a win in forty lap Spirit Auto Center Big Block Modified competition on the eve of Independence Day as they competed in Hands & 4 in the 2017 811 Dig Safely Poker Series events. Both drivers add an Ace and a King to the Poker Series hands with their first and second place finishes. Matt Stangle added his third Ace to his Poker Series hand with his sixth Bridgeport victory of the season in Stewart Stainless Crate/Sportsman competition. Tom Wills, Jr. added an Ace to his King with a win in the PennCo Tech Outlaw Stocks race in just their second hand of Poker Series competition this season.

Laubach was the third leader in the first forty lap event – the rained out feature event from May 28th’s All in at the Port. Billy Pauch Sr. led the first three laps before Brett Kressley blasted by both second place, Laubach and the leader, Pauch Sr. to take the lead on lap four. Kressley led through lap sixteen as puff of smoke could be seen from his family owned No. 19B. Laubach took the lead on lap seventeen as Watt moved up to second on the next circuit. The second half of the race saw Laubach hold the lead over Watt who stayed with Laubach and the Lori & Gary Hermann owned No. 7 to the checkered flag. Following Laubach and Watt to the checkered was Jimmy Horton who was celebrating his birthday with a top five finish. Sam Martz finished fourth with Richie Pratt, Jr. rounding out the top five.

The win puts Laubach just one victory away from his 50th Bridgeport Speedway Big Block win – a quest that begin back in May of 1998 when Laubach was a first time winner.

Laubach drew the pole for the All American 40 and led lap one before the caution was needed as Dave Hunt slowed down the backstretch. Watt restarted in fourth, moving ahead of Craig VonDohren and then Billy Pauch Jr. before setting his sights on the leader. Watt raced past Laubach to lead lap two. Another caution was needed when Travis Hill came to a stop with four laps complete, putting Laubach even with Watt on the restart. After a false start, Watt took the lead and immediately began to pull away from the field. Watt set a torrid pace as the remaining laps went caution free. Watt extended his lead over Laubach and VonDohren. Dominick Buffalino closed in on VonDohren in the final laps, finishing fourth with Billy Pauch, jr. taking fifth. Watt won with nearly an eighteen second advantage.

Matt Stangle took the lead from Jeremy Harrington and lap three and then held off the persistent challenges of Eric Kormann to take the win in the 20 lap Crate/Sportsman feature event. Kormann was all over the back bumper of Stangle’s Ace Materials No. 6 as they raced to the checkered flag. Steve Kemery finished third with 2017 Rookie Champion, Jim Gallagher finishing fourth in his first effort following Rookie Graduation. Harrington rounded out the top five.


2015 Outlaw Stock Poker Series Champion, Tom Wills, Jr. took a step in the right direction as he outraced Jeff Dirkes for the fifteen lap Outlaw Stock main event. Dirkes was a tough challenger and kept the pressure on Wills, Jr. right to the checkered flag. Jon Meyer recovered from spin to finish third with Rich Stinson taking fourth. Terry Griffen finised fifth in his first outing this season, behind the wheel of David Kramer’s No. 44J.

Autoparts Warehouse sponsors Bike Night at the Bridgeport Speedway this Saturday night as the Big Block Modifieds and Crate/Sportsman are joined by the MASS Sprint Cars with racing getting underway at 7pm.