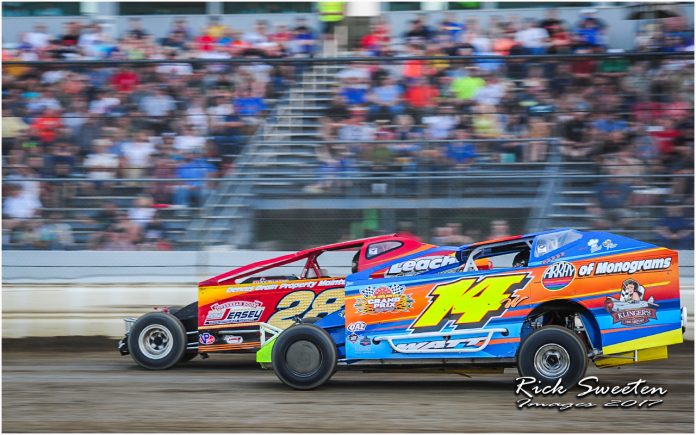 SWEDESBORO, NJ – Ryan Watt, Brett Belmont and Mark Bitner raced to the checkered flag first to gain feature wins in their respected divisions during Autoparts Warehouse Bike Night at the Bridgeport Speedway. Motorcyclists were admitted to the Logan Township facility for free and displayed their bikes behind the grandstand throughout the night. Several young fans went home with new bicycles donated by Bridgeport competitors for the event.

Tommy Beamer had the Thornton Gulf in tune when the green flag waved on the Spirit Auto Center Big Block Modified Feature event. Beamer led the way through lap five when the first caution waved for Ron Roberts who had been racing within the top five. Rick Laubach was sent to the rear for his involvement in the incident and the field lined up for the restart. Beamer led for one more lap before Bob Sarkisian raced by on the outside off turn two on lap seven. Sarkisian led the way until lap fifteen when the caution was needed for the disabled car of Bobby Firth. Sarkisian used the inside on the restart, putting Watt on the outside. “I had been working the bottom,” Watt explained. “I was really surprised when Bob (Sarkisian) gave me the outside on that restart. He had been running so good up there. I went with it. I didn’t know what would happen but it stuck,” Watt explained. Watt took the lead on the restart and led lap fifteen over Sarkisian, Richie Pratt, Jr., Dominick Buffalino and Neal Williams.

One lap later, Pratt moved into second and looked like a challenger for the lead but a flat tire had Pratt heading to the pits for a tire change and a restart at the rear of the field.

Buffalino became the new challenger, keeping pace with Watt to the checkered. Williams finished third with David Hunt crossing the finish line in fourth. A late race challenge by Jesse Hill landed a top five finish as he raced ahead of Beamer for the position.

It was Watt’s first win of the season with the car that took him to four Bridgeport Big Block wins and the track title for the 2016 season.


Continuing a family tradition, young Brett Belmont became the first of the 2017 DA’s Auto Body & Repair Rookie Class to win in the Stewart Stainless Crate/Sportsman competition. Belmont led all twenty laps of the main event, racing ahead of Eric Kormann who has strung together nine consecutive top five finishes. Brian Papiez raced his way into third but was unable to challenge for the runner-up spot. Matt Stangle raced into fourth after starting at the back of the field. Chris Jenkins rounded out the top ten at the checkered.

Belmont was winless through the ten Rookie events but had several top five finishes. “This is 100% Crate Engine, right out of the box from Fred Beahn,” a very excited racing dad, Andy Belmont exclaimed. “You can win with a Crate engine here!”

Mark Bitner raced to his first winged sprint car win of the season in the Mid Atlantic Sprint Series (MASS) as he held off the last lap challenge of Rick Stief for the win. Stief raced side by side with Bitner as they raced to the checkered flag with Bitner taking the win by the narrowest of margins. Stief was the feature winner when MASS visited Bridgeport earlier this season. Tim Tanner finished third followed by Eddie Wagner who made a last lap charge to take fourth over Jeff Geiges.

Spirit Auto Center sponsors First Responder Night this Saturday night at the Bridgeport Speedway as the Big Blocks, Crate/Sportsman and Outlaw Stocks are joined by the Garden State Vintage. Racing gets underway at 7pm.