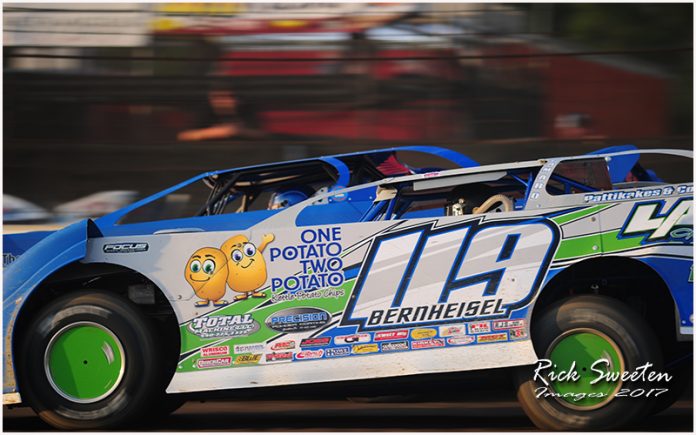 SWEDESBORO, NJ – The Bridgeport Speedway’s third running of the Three for All is in the books and once again, area race fans were treated to some close racing in three different divisions – Super Late Models, 358 Small Block Modifieds (Spec Head) and United Racing Club (URC) Sprint Cars. It was a great night of racing on the lightning fast 5/8 mile speedway and the fans loved it!

After three years of trying, Bryan Bernheisel took home the checkered flag in the Delaware Auto Exchange Super Late Model feature event, outrunning a very determined Kyle Hardy who was making his first ever Bridgeport start. Bernheisel led all but the first lap after Austin Hubbard took the lead on the green flag lap and then brought out the caution when he slowed one lap later. Bernheisel fended off several contenders, including Chad Hollenbeck and Kenny Pettyjohn, but in the end, Bernheisel had what was needed to race to the finish line ahead of Hardy, Danny Snyder, K. Pettyjohn and Gary Stuhler.

Unlike his father, Bryan Bernheisel like the bigger tracks and came to Bridgeport with plenty of laps of experience on the bigger half miles like Selinsgrove. “I grew up racing these types of track,” Bernheisel explained. “I’m glad we had a good field of cars so that we can keep coming back here!” And the fans certainly agreed as they gave their resounding show of support during the Super Late Model Victory Lane.

Godown had led the distance, taking the lead at the start of the twenty-five lap feature event. That left him without any knowledge of where the competition was racing when he was faced with his first challenge with less than ten laps to go. “I really don’t like leading for that very reason, ” Godown explained. He elected to restart from the inside, giving Kressley the outside line. “I knew there was a top there but I really didn’t want to take the chance,” Godown added. Lining up of the outside of the front row for the restart, played right into Kressley’s hand. “I hate making that decision on a restart but this time, I didn’t have to make the choice and it was what I wanted anyway,” Kressley remarked. “I was getting loose on the bottom about half way through the race and I was really locked down on the top.”


The multi-groove surface led to some good racing throughout the race. Godown led Kressley and Duane Howard through lap seventeen. Godown tried to regain the lead but Kressley was able to pull away in the final laps. After starting back in the twelfth position, Ryan watt raced his way up to fourth following the restart. Watt went on to challenge Howard for third but Howard wasn’t about to go without a fight. After some pretty physical racing, Watt took third and then closed the gap on Godown at the end of the race. Howard finished fourth with Craig VonDohren following in fifth.

After picking up a Bridgeport victory in a 305 Sprint Car race just a few days earlier, Mark Bitner took the lead at the start of the URC feature event and looked like he wanted to make it two in a row. Bitner led the first eight circuits before Weller drove into the lead on lap nine. Davie Franek challenged Bitner for second on the next lap and took over the runner-up spot.

By half way, Weller was into lapped traffic and that allowed both Franek and Bitner to close in on the leader but Weller skillfully made his way through traffic and pulled away once again. “We definitely needed the clean air,” Weller explained.

Just two laps from the finish, the caution waved for Justin Whittal, setting up a single file shootout for the finish. Weller raced to the checkered without a challenge from Franek while Davey Sammons had a great restart, racing his way into third at the checkered. Bitner finished fourth with Chris Coyle rounding out the top five.

Weller became the first repeat winner in any of the Three for All Events as he earned back-to-back victories in the URC portion of the show.