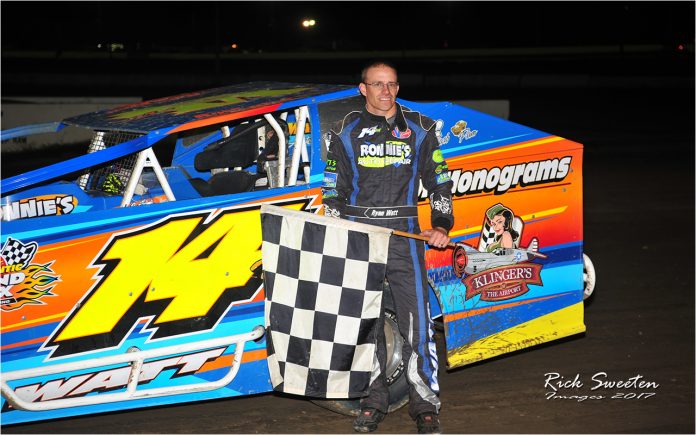 SWEDESBORO, NJ – For just the second time this season, reigning Bridgeport Champion Ryan Watt raced for the win in the Saturday night twenty-five lap Spirit Auto Center Big Block Feature. Matt Stangle and Brian Papiez each picked up Stewart Stainless Crate/Sportsman feature win with Stangle winning the rained out from mid-June while Papiez captured the win in the regular twenty lap main event. Tom Wills, Jr. led the PennCo Tech Outlaw Stocks to the finish line, in front of a three way battle for second at the end of fifteen laps.

Sam Martz led the way for the first seventeen laps of the Big Block feature event in a race that went caution free until three laps remained.
Martz caught the back of the field on lap ten as he raced well ahead of Jesse Hill, Watt, Rick Laubach and David Hunt. Hill and Watt closed the distance on the leader as they raced through lapped traffic. Hill crossed the start/finish line on Martz’s back bumper on lap fourteen but by the time the leaders made another circuit, Watt had moved into second. Two laps later, Martz and Watt crossed the line side by side with taking over the top spot on lap eighteen.

With Watt out in front, it was a three way battle for third as Martz, Hill and Laubach raced for position. Laubach got by Hill for third but Hill raced right back to reclaim the position on the next lap. Watt took the checkered flag over Martz, Hill, Laubach and Dominick Buffalino whose late race charge gained a top five finish for the No. 51m.

The race was Watt’s fifth Bridgeport win of the season but only his second Saturday night victory. Watt and the Roberts Racing No. 14w arrived at the track just before warm-ups after encountering a encountering first engine than rear-end issues with the No. 14w as they prepared for the night of racing.

Rookie Champion, Jim Gallagher, Jr. led the first twelve laps of the Crate/Sportsman feature held-over from June 17th before running into problems in turn two. Second place competitor, Roger Manning was unable to avoid the car spinning in front of him but was able to continue without losing position. Manning became the race leader on lap thirteen when green flag racing resumed. With just two laps to go, Matt Stangle challenged Manning on the outside, taking the lead. Stangle drove to his seventh Bridgeport victory while Manning finished second followed by Brian Papiez, Eric Kormann and David Crossman.


In the regular feature event, Papiez avoided an early race multi-car incident, taking the lead on the restart and leading every lap for his fourth Bridgeport feature win. In this event, it was rookie, Andrew Belmont who raced his way by Manning with just less than five laps remaining to take over second. Belmont was able to cut into the lead that Papaiez had built but was not able to get close enough to mount a challenge. Manning finished third followed by Korman and Gallagher, Jr.

Tom Wills, Jr. raced to his fourth win of the season in PennCo Tech Outlaw Stock competition. By halfway, Wills was fending off the challenges of Brian Ludwig who in turn was holding off the advances of Jeramy Doerr. With less than one lap remaining, the caution was needed for the disabled car of David Kramer, setting up a one lap shootout for the win. Wills held the lead while Ludwig, Doerr and now Jeff Dirkes raced for the runner-up spot. Wills raced to the checkered with Doerr crossing the line in second. Dirkes finished third followed by Ludwig and Jim Avery.

A full night of racing is planned for the Bridgeport Speedway next Saturday night with Racing for Ron John m.Night that will include the Big Block Modifieds, Crate/Sportsman and Outlaw Stocks, Driver Appreciation Night and Powder Puff races! Lots of fun and surprises! Racing gets underway at 7pm.