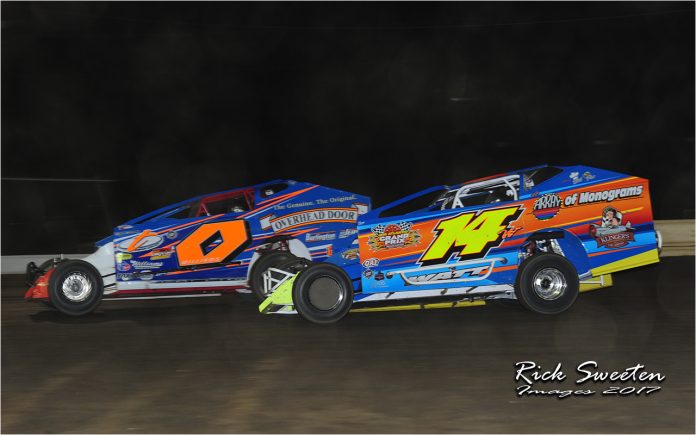 SWEDESBORO, NJ – He’s led laps and he’s finished second on a number of occasions but on Saturday night, Neal Williams drove the Sal DeBruno owned Overhead Door No. 0 to victory in the Race for Ron John sponsored by Bill Misocki at the Bridgeport Speedway. Williams drove a brand new Teo Pro car with Morrison horsepower into the Winner’s Circle on the car’s maiden voyage in the twenty-five lap Spirit Auto Center Big Block Modified feature event. It was Williams’ first Big Block Modified win at the Bridgeport Speedway and his first Big Block win since returning to DeBruno’s No. 0 just a little more than a year ago.

Ron John Koczon is a former Modified stock car driver who has been battling cancer this last year. Koczon is truly one of racing’s Mr. Nice Guys and it showed through the support of this event. More than $5,000 was raised through a Chinese Auction, Bake Sale and donations during the night of racing. “This was all about Ron John,” sponsor Bill Misocki stated. “I am happy that I could do this for him.”

In his last four races, Williams has had an engine blow, flipped and then had more engine issues when he raced the team’s Small Block Modified a week ago. On Saturday night, everything finally went Williams’ way. “I was really hoping that it would rainout,” Williams admitted. “I wanted to get on the track with the car, run some hot laps and then take it home and see what we could do to make it better.” But against the odds, the Bridgeport Speedway won the battle with Mother Nature while Williams won the battle against the field of twenty-five Big Block Modifieds.

After winning the second qualifying heat, Williams started third for the main event. Polesitter, Dave Shirk led the first three laps before Billy Pauch took the lead on lap four with his K&A Excavating No. 15. Williams closed in on Pauch on lap ten and had the lead as the field exited turn four to complete the circuit. Williams then proceeded to drive away from the competition. A restart on lap seventeen, brought the field back to Williams who elected to restart from the outside with Pauch, Ryan Watt and Dominick Buffalino right behind. The race was for second as Watt took the position on lap eighteen but Williams had already driven away.

Several multi-car incidents marred the start of the Crate/Sportsman feature sending the cars of championship contenders Matt Stangle, Brian Papiez and Eric Kormann to the pits before one lap could be completed. The damage on Kormann’s No. 16 was too extensive for Kormann to extend his thirteen top five finishes but Stangle and Papiez returned to the rear of the field.

Adam Cox led the way for the eleven laps, withstanding challenges from Roger Manning just before the halfway point. Stangle raced back into contention, first taking second from Manning and then setting his sights on Cox. Stangle became the race leader on lap twelve and led the field to the checkered flag at the end of twenty laps. Manning finished second with Cox gaining his best finish of the season in third. Tom Sherby also collected a season best finish to take fourth over Papiez who rebounded to a fifth place finish.

Brian Ludwig has been in the thick of every feature event this season and led the way until just before the half way mark on Saturday night when Jeramy Doerr put his No. 3D into the lead. Tom Wills, Jr. raced from his tenth place start to finish second with Ludwig taking third. Jeff Dirkes races across the line in fourth with Rich Stinson rounding out the top five at the finish.

Fay Lancaster, Paige Brown and Colleen Dirkes picked up wins in the Lady’s Powder Puff races for the Modifieds, Crate/Sportsman and Outlaw Stocks.

Action returns to the Bridgeport Speedway next Saturday night as All County Garage Door LLC sponsors 1/4 Midget Night at the Bridgeport Speedway. Quarter midget drivers will have their cars on display prior to the start of racing and will be happy to talk to the fans about their racing experience. The Outlaw Stocks will compete in two feature events in addition to a full show of Big Block Modifieds and Crate/Sportsman. The guys behind the scenes – the mechanics – will have their chance to get behind the wheel and compete in special Mechanics races at the end of the night. Racing gets underway at 7pm.