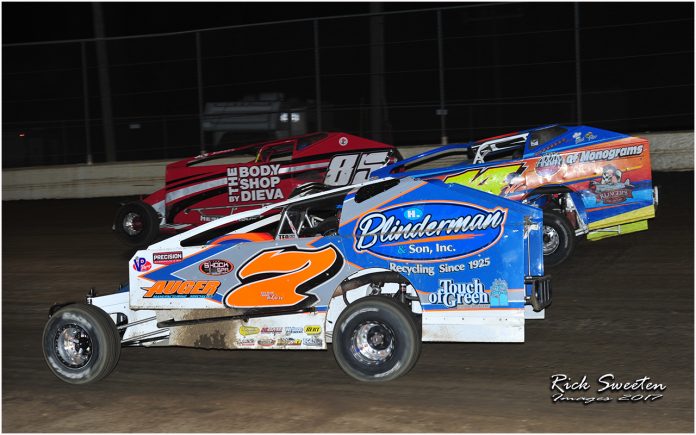 SWEDESBORO, NJ – It was Pennco Tech’s Scout Night and Back 2 School Night at the Bridgeport Speedway as Ryan Watt and Brian Papiez added to their season win totals and Ryan Stillwaggon picked up his first win of the season in Mid Atlantic Sprint Series (MASS) action.

Since 1973, Pennco Tech has been helping people achieve their goals – being the stepping stone people use to turn their dreams into reality. With two locations in Blackwood, NJ and Bristol, PA, Pennco Tech offers studies in Automotive Technician, Medical Assistant, Air Conditioning & Heating as well as Pharmacy Technician studies. Pennco Tech has been a division sponsor at the Bridgeport Speedway for several seasons as the title sponsor of the Outlaw Stocks.

In Spirit Auto Center Big Block Modified action, Mike Franz jumped out in front to lead the first six laps before Richie Pratt, Jr. raced his way into the lead from his seventh place start. Franz slowed in turn three, drawing the caution on the next lap. Pratt led the way over Ricky DiEva and Tommy Beamer before Rick Laubach raced into third on lap nine. Watt raced into fourth one lap later.

Pratt dominated out front as Laubach looked to the inside of DiEva to challenge for second. Watt caught up to the battle for second, choosing the outside lane for his move. Watt was along side of Laubach as they raced into turn three and looking to challenge DiEva for second. As the three drivers raced out of turn four, DiEva and Watt made incidental contact. “I don’t even think he (DiEva) knew I was there,” Watt related. “The contact with my right front sent me down into Rick (Laubach). It’s a good thing he (Laubach) got out of the gas,” Watt added. “He saved us both from a nasty wreck.” Watt was able to regain control, now racing in third and chasing DiEva in second. Watt took over second in turn three with Laubach moving into third at the start/finish line.

With ten to go, Pratt led Watt, Laubach, DiEva and Beamer but Watt took the lead one lap later. Laubach had just taken over second on lap twenty when the Hermann No. 7 slowed. The caution waved as Laubach was assisted to the pits.


There was plenty of action behind Watt as Beamer took over second on the restart and Jim Britt raced up the inside to take over third on the next lap. After an early race incident, Dominick Buffalino raced back into the top five as fourth place Neal Williams challenged Britt for third. Watt raced to the checkered flag for his seventh win while Beamer collected his best finish to date in second. Williams finished third with Britt and Buffalino rounding out the top five.

After the action in the Big Blocks, the Stewart Stainless Crate/Sportsman were not to be outdone. Rookie graduate, Tommy Ericco, led the way for the first six laps before Eric Kormann drove into the lead on lap seven and immediately pulled away from the field. Kormann led through the halfway mark as point leader, Matt Stangle and Brian Papiez made their way through the top five.

Repeated cautions kept the field close but Kormann was holding off Stangle for the lead. A lap sixteen restart saw Stangle challenge Korman but it was Papiez who was on the move on the outside, first making his way by Stangle and then racing Kormann out of turn four to take the lead with three laps to go. Papiez took the win – his fifth of the season – and moved within eight points of Stangle in the championship hunt. Kormann finished third after leading most of the way. Roger Manning made a great comeback after an earlier incident to finish fourth with Tom Moore rounding out the top five.

Ryan Stillwaggon made only his fourth start of the 2017 season with the MASS 305 sprint cars but was the class of the field, setting fast time during warm-ups and his heat race. Tommy Carberry took the lead on the initial start but it didn’t take Stillwaggon long to drive from his fourth place start and into the lead before the completion of the first lap. Stillwaggon drove unchallenged to the win in the twenty lap feature event over Carberry. Austin Bishop had another strong outing on the Bridgeport 5/8th mile to finish third with two time feature winner, Mark Bitner and Eddie Wagner rounding out the top five.

K&A Excavating’s Billy Pauch Fan Appreciation Night gets underway at 4:30 next Saturday before Bridgeport’s final points race of the season gets underway. Pauch will be on hand with his No. 15 to meet with fans prior to the night’s event. Any fan wearing their Billy Pauch t-shirt will receive a $5 discount on their admission to the races. It is also the final Bike Night of the 2017 season with all riders on motorcycles being admitted free. Several lucky boys and girls will go home with brand new bicycles at the end of the night. Racing gets underway at 7pm.