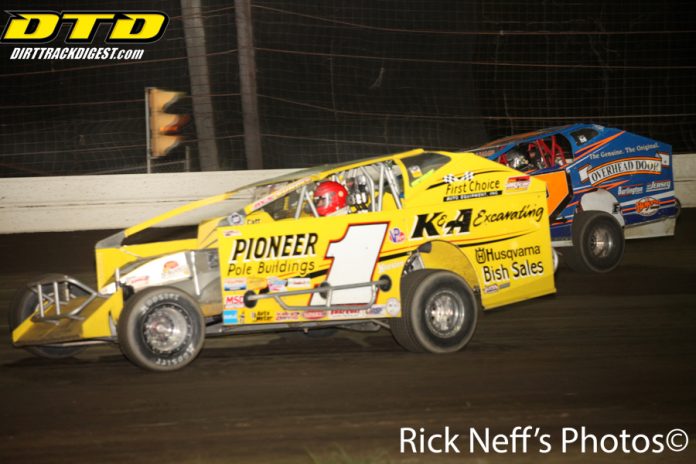 SWEDESBORO, NJ – Just one year ago, Billy Pauch added another title to his storied career when he drove to the win in the Bridgeport Speedway’s King of the Big Block event on the lightning fast 5/8 mile speedway. This week, Pauch will return to defend that title!

K&A Excavating Company, Inc. returns as the title sponsor of the event. K&A Excavating is a company who has built their reputation on their commitment to providing quality service – a commitment that has earned them many valuable customers over the years. With more than thirty years of experience, K&A Excavating is the “go to” company when you need asphalt removal, land clearing or site preparation. Only the best equipment is used for each job by a skilled staff who are able to perform the tasks involved in all projects. K&A’s mission statement is to provide customers with courteous and friendly service and quality workmanship.

Pauch was flawless in last year’s event – first winning his qualifying heat race and then leading every one of the fifty laps to capture the win. Pauch, Duane Howard, Jamie Mills, Dominick Buffalino, Tommy Beamer and Ryan Watt all started the event from the top six starting positions. With a lot on the line, it took three attempts to score lap one as both Beamer and Watt made trips to the pits for repairs.

It was Buffalino who chased Pauch in the early going before a cracked header plagued Buffalino on the restarts, allowing 2015 track champion, Mills to take over the runner-up spot. Pauch led Mills, Buffalino, Howard and Brett Kressley to the checkered flag at the end of fifty laps.


Pauch is hoping to maintain his King of the Big Block title but will have his work cut out for him. Three time track champion, Ryan Watt has been a formidable competitor all season. He has collected seven Bridgeport Speedway victories including the Super DIRTcar event where Pauch finished second. Dominick Buffalino recently collected a big win and will be looking for his first Bridgeport victory of the season after finishing second in points to Watt for 2017. 2012 Bridgeport Champion, Rick Laubach will be looking to add to his win total in this event as will David Hunt, Sam Martz, Richie Pratt, Jr. and Neal Williams.

Of course, the Bridgeport regulars will be challenged by a host of invaders including Duane Howard and the Norm Hansell No. 357 have reached a peak and are have been collecting wins in some big events. Recently crowned 2017 Orange County Fair Speedway Champion, Jimmy Horton will be on hand with the Halimar No. 43, looking to add to his all time feature win total. New Egypt Speedway Champion, Billy Pauch Jr. will compete with the Danny’s Pizza Pizazz No. 51. Ryan Godown has to be considered a threat whenever he is in the field. Fresh off of two track titles, Craig VonDohren will compete in the Dick Biever owned equipment. Jeff Strunk will be behind the wheel of Glenn Hynneman’s No. 126, fresh off his win in the Freedom 76.

The King of the Big Blocks weekend gets underway on Friday night with the Small Block Modifieds and sprint cars of the Mid Atlantic Sprint Series. Grandstands open at with racing getting underway at 7:30. The 358 Small Block Modifieds will compete in a twenty-five lap main event while the MASS competitors will race in a twenty lap feature event – their final point race of the season.

On Saturday, the grandstands will open at 4pm for a 6:30 starting time for the Spirit Auto Center Big Block Modifieds, Stewart Stainless Crate/Sportsman and Pennco Tech Outlaw Stocks. The Big Blocks will compete in a fifty lap event that pays $10,000 to the winner and $500 just to take the green. The Crate/Sportsman will race to the checkered flag at the end of twenty laps while the Outlaw Stock feature will be a fifteen lap event.

There is a special two day admission package – general admission to both Friday and Saturday’s events plus a $10 concession voucher for only $45.!

It’s sure to be a great night of racing that you won’t want to miss!