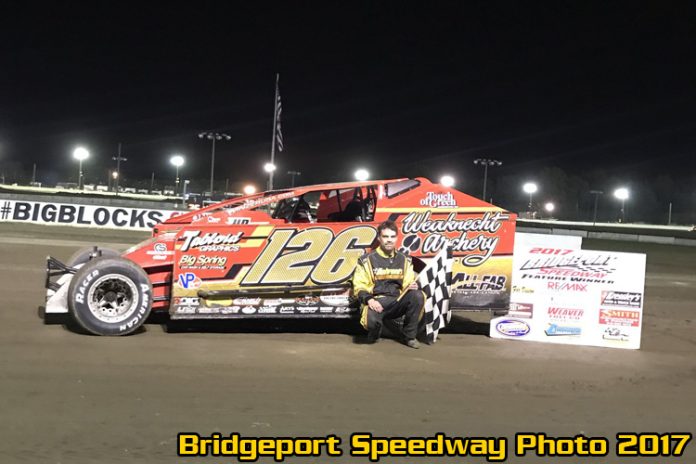 SWEDESBORO, NJ – Fresh off his big win in the Freedom 76er a week ago, Jeff Strunk drove Glenn and Bonita Hyneman’s No 126 to victory in Bridgeport’s Small Block Modified show on the night before the K&A Excavating King of the Big Block event. Forty Small Block Modifieds competed for starting positions in the feature event.

The Small Block Modifieds were joined on the doubleheader program by the 305 Sprint Cars of the Mid Atlantic Sprint Car Series for their final point race of the 2017 season. Eddie Wagner captured the first championship of the newly formed organization while driving to his first feature win of the 2017 season.

Strunk had one victory on the 5/8th mile Bridgeport Speedway in October 2006 but it was the 49th feature win for the Hyneman’s as car owners in Bridgeport competition. Polesitter, Anthony Perrego jumped into the lead at the start of the twenty-five lap event but felt the pressure from Strunk from the start. Bob Sarkisian, Rocco Infante and Frank Cozze were embroiled in a battle for fourth as they raced behind Perrego, Strunk and Jesse Hill during the early laps.

Strunk tried a move to the inside of Perrego on lap four but went to the outside of the Empire State competitor on the next lap, taking over the lead on lap five as Strunk led Perrego, Sarkisian, 2017 Big Block Champion, Ryan Watt and Hill. Cozze, who won this event last year, broke into the top five on lap six. Watt moved into third on lap nine.

Strunk set a blistering pace as he navigated his way through lapped traffic just before the half way mark. It was all Strunk in the non-stop event that was completed in just over nine minutes.

Wagner led from the green flag to the checkered to capture the MASS sprint car feature event to capture the win in their twenty lap main event over Austin Bishop. Bishop stayed with the leader throughout the race but was not able to challenge for the lead even when the caution waved just before the half way mark, setting up a double file restart for the field.

Brandon Poff had one of his best outings of the season as he raced in third after doing battle with Jeff Geiges in the early going and then holding off the advances of Rick Stief later in the event. Tim Tanner broke into the top five during the second half of the race, leaving Geiges and Steph Carberry to battle side by side for the sixth spot for the remaining laps.

Wagner took the win over Bishop, Poff, Steif and Tanner. Tom Carberry, Sr. was named as the MASS Rookie of the Year as the long time Modified driver, competed with MASS throughout the 2017 season.