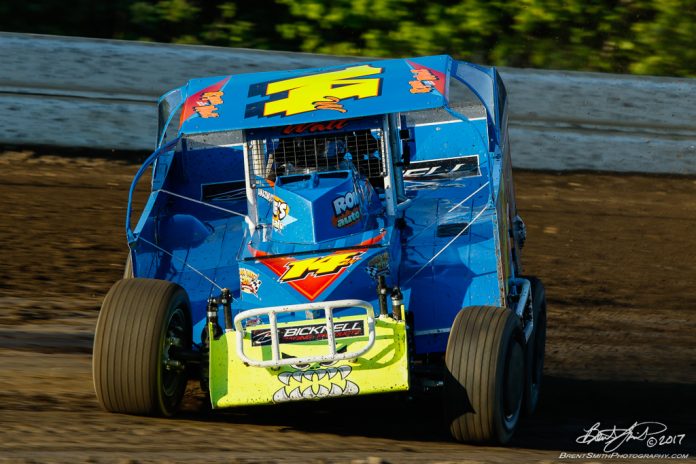 SWEDESBORO, NJ – After a hard fought battle for the lead with Oley, PA driver, Craig VonDohren, 2017 Bridgeport Track Champion, Ryan Watt raced into the lead on lap thirty-six and led the final fifteen laps to capture the K&A Excavating sponsored King of the Big Block title and the $10,000 payday that went with it at the Bridgeport Speedway on Saturday night. A large crowd gathered to witness the second annual King of the Big Block event, won last year by Billy Pauch.

After handily winning his qualifying event, Pauch lined up eleventh on the starting grid of twenty-six cars that took the green flag. Unfortunately, Pauch was one of two cars that flipped on the homestretch during a lap two incident. When a car got out of shape on the restart in mid-pack, Pauch and Ryan Anderson had nowhere to go, climbing up and over cars in front of them. All drivers involved escaped injury but Pauch and Anderson’s mounts were heavily damaged. Several other cars were damaged but only Billy Pauch, Jr. was unable to continue immediately following the wreck.

Polesitter, Rick Laubach had the Ryan Kerr owned No. 1K out in front at the start despite pressure from VonDohren who quickly advanced from his fifth place start, Jojo Watson and Watt. Laubach led through lap two when Watt drove into the lead. VonDohren was in hot pursuit as he chased Watt through lap eight and then took the lead as he raced Dick Biever’s No. 14s down the backstretch.

Duane Howard raced by Watt to take over second following a lap fifteen restart but Watt battled back to take over the runner-up spot behind VonDohren. Von Dohren led the way through half way with Watt a few car lengths behind, followed by Howard, Laubach and Watson. Lapped traffic supplied another dimension as the leaders approached lap thirty and Watt closed in on VonDohren.

Jimmy Horton drew a caution on lap thirty-one when he headed pit side for a tire change. Watt challenged for the lead on the restart, first looking to the inside. Jeff Strunk, the winner of the Friday night Small Block event, raced into the top five on lap thirty-one but all eyes were on the two No. 14s at the front of the pack as Watt tried both inside and outside to regain the lead. VonDohren and Watt raced side by side to the stripe on lap thirty-five but it was Watt who had the lead the next time by.


Watt promptly pulled away from VonDohren and there was no further contest for the lead. Strunk continued to pick off positions in the top five, advancing to third in the race’s final laps.

Brian Papiez raced into the lead on the final turn of the final lap to capture his sixth Bridgeport win of the season in the Stewart Stainless Crate/Sportsman over Kris Lilick who had led the way until that point. Craig Whitmoyer finished third followed by Roger Manning and Ryan Simmons.

Tom Wills, Jr. and Jeremy Doerr battled fender to fend in the Pennco Tech Outlaw Stock feature with Wills edging Doerr for the win at the checkered flag. Jeff Dirkes rebounded from an earlier incident to finish third followed by Gary Klimeczak and Jon Meyer.

This event was also the fifth hand of the Colonial Pipeline’s 811 Call Before You Dig Poker Series events for the Big Blocks and Crate/Sportsman and fourth hand for the Outlaw Stocks.

Ryan Watt added his third Ace to his Poker Series hand with his win while Dominck Buffalino works on a possible straight, adding an eight to his Queen, Jack and nine. Brian Papiez now has a pair of Aces to Matt Stangle’s three Aces but Roger Manning added another card to his possible straight – a Jack to go with his King, Queen, nine and eight. Tom Wills, Jr. now has two pair – Aces and Kings to lead the Outlaw Stock Poker Series competition.

Colonial’s pipelines are buried underground, usually with at least three feet of cover however, with the passage of time, erosion and human activities can alter that depth. That’s why Colonial encourages you to call before you dig! Any project – large or small – you are encouraged to dial 8-1-1 before you dig.

Action returns to the Bridgeport Speedway this Saturday the Dirty Jersey 5 – a Short Track Super Series Event that will feature the Modifieds, Crate/Sportsman and Outlaw Stocks. Racing gets underway at 6:30pm. Should it be needed, a rain date has been set for Sunday, October 1.

811 CALL BEFORE YOU DIG POKER SERIES