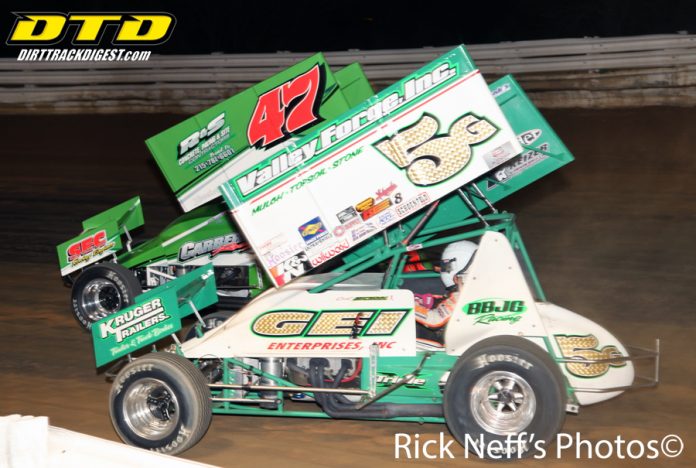 The inaugural event produced great racing a year ago when Curt Michael raced to the win in Friday night action and Lucas Wolfe improved on his fifth place finish on Friday to capture his first ever Bridgeport Speedway win on Saturday. Michael earned the coveted Midge Miller Memorial Trophy for accumulating the most points during the two day event with Miller’s family making the trophy presentation at the conclusion of Saturday’s action.

While the competitors will be racing for URC Championship points on both days of racing, Curt Michael has already claimed his tenth URC Championship while behind the wheel of the Bill Gallagher owned No. 5G. Chris Coyle, Davie Franek, Josh Weller and Robbie Stillwaggon are trailing Michael going into the final weekend of racing.

The Midge Miller Memorial trophy will again be awarded to the URC competitor who amasses the most points during the two day event.

2017 is URC’s 70th season as a traveling sprint car organization making it the oldest club of its kind in the United States. The celebration will continue as the organization inducts three new members into its Hall of Fame during the Big Track Classic weekend.

On Friday night, John Zimmerman who served as club president for some twenty years, will be inducted into the Hall of Fame. Pat and Kathy Palladino will be inducted during Saturday night’s schedule. The Palladino’s have been the most successful car owners in URC history, winning championships with Sean Michael (1999), again in 2000 with multiple drivers, 2005, 2006 and 2007 with Curt Michael and again in 2009 with JJ Grasso.
In addition to the six titles, Kathy Palladino was the first women to be a URC Car Owner Champion.

Driver, Gary Gollub has already been inducted in the URC Hall of Fame earlier this season.

Long time URC competitor, Tim Higgins will return to action during the Big Track Classic Weekend. Higgins was sidelined with some health issues several seasons ago and will make a one time reappearance on this weekend behind the wheel of his nephew’s sprint car.

The URC competitors will be joined in Friday night action with the Underdog 20 – a race open to any Crate/Sportsman competitor who has not won a feature event. Pit gates open at 4, grandstand gates at 5:30 with racing getting underway at 7:30

On Saturday, the URC sprint cars will be joined with the Mid Atlantic Sprint Series (MASS) and the Bridgeport Crate/Sportsman competitors. All will compete in qualifying races and main events. Pit gates will open at 1pm, grandstands at 3pm and racing gets underway at5pm.

A good field of cars is expected which can only mean another great weekend of racing on Bridgeport’s lightning fast 5/8th mile speedway.

Come out early and enjoy the live entertainment and delectable speedway concessions. Join the Bridgeport Bandit for a ride on the Bandit Bus to get a close-up view of the behind-the-scenes action in the pit area before the start of the races. Pick up a copy of the Bridgeport Bullet – the official program of the Bridgeport Speedway – or a t-shirt to remember your racing weekend.